Liveblog: Syria Case Hearing - The People's Tribunal on the Murder of Journalists

On 16 and 17 May 2022, the Syria Case Hearing of the People's Tribunal on the Murder of Journalist Nabil Al-Sharbaji was convened live in The Hague from 9am-5pm CET. Re-read highlights and re-watch the livestream below.

To find out more, you can visit the Tribunal website.

"We need to show that it is possible to create a safer world for journalists."

On this day, the Prosecutor heard witnesses on the context of impunity for crimes against journalists in Syria since 2011. Witnesses among others, testified about their experiences with attacks on journalists and the role of the State and other actors in the perpetration, prevention and investigation of these crimes.

LIVE: The Case Hearing of Nabil Al-Sharbaji at #ThePeoplesTribunal was the first attempt of justice for a Syrian journalist who was not a foreigner. He believed in journalistic life, and paid his life for his principles.” - Yara Bader, Head, Syrian Center for Media Freedom and Expression.

"We have counted 1609 violations against media workers in Syria, and 702 murders between 2011-2022. No action was taken except for 3 cases, of foreign journalists reporting in Syria. Only 1/10 of cases of murders of journalists reach the court. The court does not recognise them as journalists who risk their lives to show what is happening on the ground.” - Yara Bader, Head of the Syrian Center for Media and Freedom of Expression.

Almudena Bernabeu is a renowned international lawyer with a long career in Transitional Justice and International Criminal and Human Rights Law. As the Hearing's Prosecutor, Almudena Bernabeu oversees the compilation of evidence, hears witnesses and leads the proceedings.

"Most Syrians do not believe they are mainstream media. The people are already convinced that what they are getting is propaganda and not information, and this has been the case even before the protests. That helped the opposition of the mainstream media."

"Most of them - 99% of journalists are out of Syria. As are many other activists, they are out. Now, many of course stopped working as journalists, and others followed up. Some of the media outlets are still now publishing from Turkey. They have quite a lot of circulations among Syrians." - Journalist Hala Kodmani

"Nabil was doomed- not only was he an activist in the 2011 uprising, he was from Darayya AND he was a journalist. In the eyes of the regime, he was a triple enemy." - Uğur Ümit Üngör, Dutch scholar of genocide and mass violence. 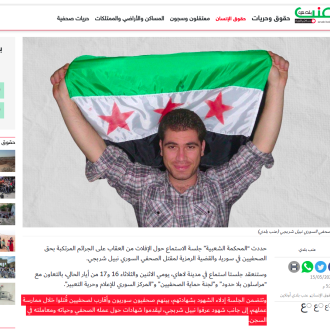 "There are no words to describe an attack." - Edith Bouvier

"I know that that attack was not an accidental shelling. Any journalist found in and around the battlefield had to be executed." - Paul Conroy
"There was a gap that had to be filled on the ground in Homs. This was open season - the press does and play a critical role.. the press are the eyes and ears of the world. Because when you have a regime that really does bad things, this is why they attack the press - if there's no one to get this out. This highlights exactly why we need a free press. 6 hours later- Marie and Remi were dead- as a direct consequence of reporting- we had the temerity of broadcasting live from hell. If we can't tell human stories- that's what we should be doing." - Journalist Paul Conroy


"To talk about the bombings, the targeting of hospitals, schools. We have to continue to tell the stories about the Syrians and what is happening in Syria- because at least we have to know what really happened in Syria, even if absolutely nothing is done about it. There are hundreds of journalists who are making sure we know what is happening. They are the ones creating the archives, in case there is justice." - Journalist Edith Bouvier

"Every single legal case adds legal weight. There's a real danger- there's this creeping rehabilitation of this murderous regime back into the int'l community- collective amnesia is coming over the world. As if they're not that bad- they should not be allowed into any int'l organisation- they should be where they belong as outcasts and pariahs like Russia until they acknowledge the killings." - Paul Conroy

"Judges are more aware of what happened in Syria and thanks to all the archives we showed them. We cannot let them normalize the Syrian regime. We have to continue informing people on what is happening in Syria, otherwise there is a huge wave of misinformation - the torture, the bombing of hospitals, the chemical weapons. We have to continue." - Edith Bouvier

"We are talking about Syrian society- seeking freedom for democracy- and here we find that it is not easy to follow up or document all the violence. Because the scale became too big." - Mazen Darwish, President, Syrian Center for Media and Freedom of Expression

"I do not want to say 'bring justice'- because justice is something totally different. Because we don't have the luxury to go to the International Criminal Court. It is clear that the Syrian regime does not face any kind of #accountability." - Mazen Darwish provides witness testimony.

"There is total impunity in Syria both in law and in practise." -Nadim Houry, Member of the High Level Panel of Legal Experts on Media Freedom

The second day was dedicated to the murder of Nabil Al-Sharbaji. The Prosecutor presented the evidence collected and heard witnesses, who spoke about Nabil Al-Sharbaji’s life and work, the circumstances of his death and the State investigation of the murder.

The day began with a presentation by A Safer World For The Truth investigator Jos Bartman, of physical evidence at the Hearing, provided by Mansour Omari - a collection of names of 82 inmates who were imprisoned in the most harrowing conditions. The prisoners mixed their own blood to create ink and using chicken bones, carefully wrote down the names on the fabric- hidden inside a shirt that Mr. Omari wore on the day that he was released.

This is the story of Nabil Al-Sharbaji.

"Journalists are being attacked, harassed and killed. Impunity remains rife. The lack of effective Prosecution or of any effective mechanism still remains the reality. Journalists are being targeted for reporting the truth, exposing violence and criminal activities as well as repression. In these cases we focused on three specific cases- they each follow the pattern of doing exactly the same thing - engaging with exactly the same activity: reporting the truth.

Journalists are consistently being targeted precisely for doing their work in the name of freedom of expression. All over the world, states are failing to protect journalists and are actually deepening the repression - increasing hostility and harassment of treatment of journalists.

Impunity will not be successfully addressed until we understand four things:

1. That human beings are killed because they are exercising the freedom to inform.

2. These professionals and their families are not officially supported as victims in quest of justice.

4. Investigating and increasing the awareness as it happens for example gender violence - freedom of expression - need to be taken into consideration

The time has come and indignation runs pretty deep. We are aware, we have been listening and we have learnt a great deal so from this Prosecution's perspective it is time to act." - Almudena Bernabeu, Lead Prosecutor.

"This is in fact the story of an entire nation. We are grateful to all the men and women who found the courage to come forward and tell their stories as well as the expert witnesses who took part in these hearings. We are very thankful." - Marina Forti, Member of the Panel of Judges, the Permanent People's Tribunal

Onderwerp:
Safer World For The Truth