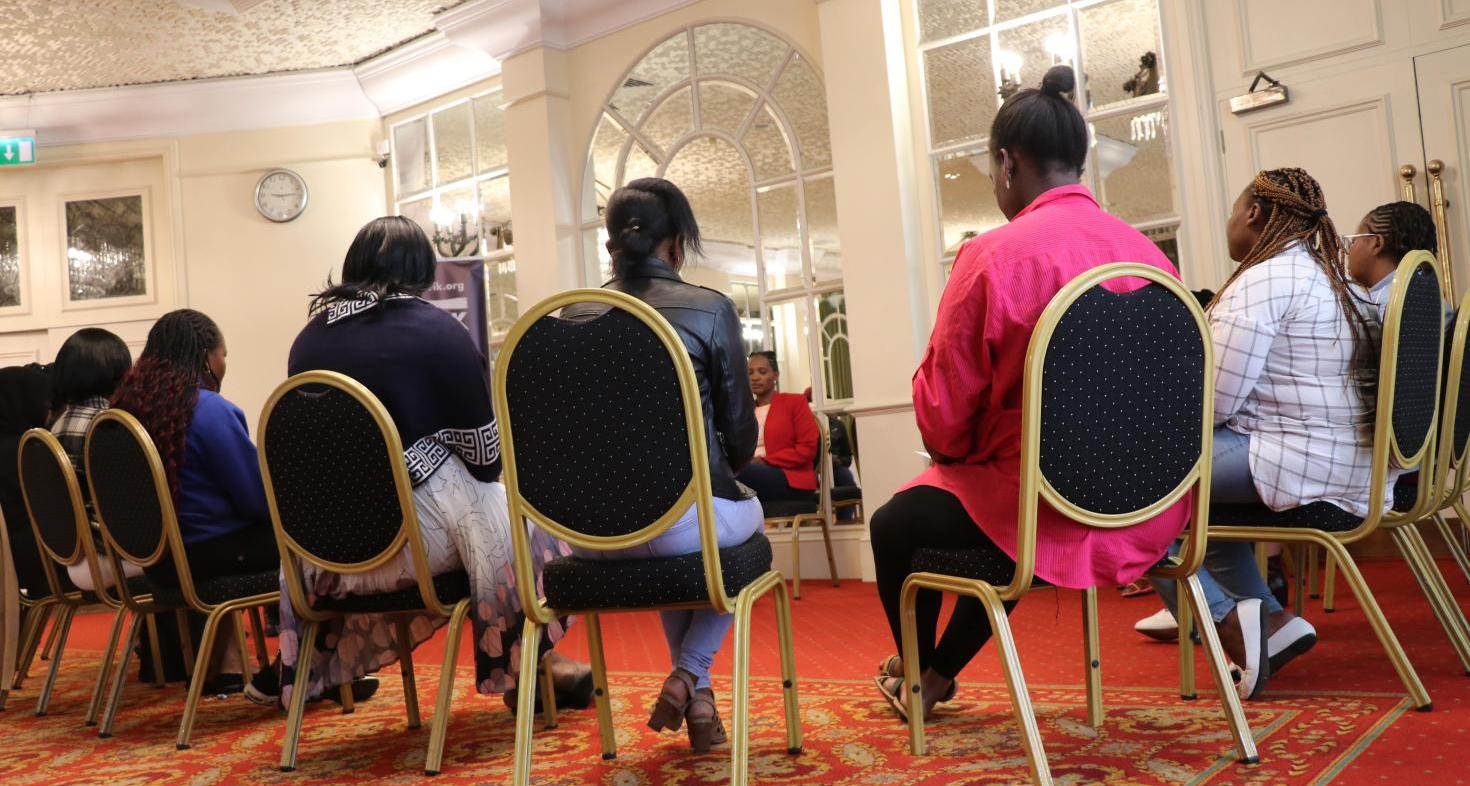 Creating a safe space for women journalists in Kenya

Established in 1982, the Association of Media Women in Kenya (AMWIK) has been working to amplify the voices of women for 40 years. In Kenya, for very many decades, women were not considered as people who deserve a voice. “Basically, we were not supposed to talk on our own behalf”, Judie Kaberia, Executive Director of AMWIK, says. “We have very few women in the media. Women journalists in Kenya face a lot of discrimination, and are seen as journalists who are not supposed to cover difficult topics.”

With Judie, and her colleague Lilian Museka (Programmes Officer), we discuss the issues that women journalists face in Kenya, and the peer to peer support groups that are starting with the support of Free Press Unlimited, providing a much needed safe space for women journalists to share their experiences.

What is AMWIK’s vision on the issues women in Kenya face, and women journalists specifically?

Judie: “In Kenya, women and girls struggle with a lot of challenges and cultural issues, including practices like female genital mutilation or underage marriages. These are issues that we have to grapple with. So our vision is a just society where rights of both men and women are respected, where issues are discussed and not undermined or made fun of. AMWIK is a membership organisation, with more than 300 women journalists as a member. This is a diverse group of journalists who are independent content producers, freelancers, editors working in newsrooms, and also university students who are in their final year of study.

Women journalists in Kenya report the highest rates of sexual harassment in newsrooms, according to a study done by WAN-IFRA and the University of London. Do you recognise this from your work with AMWIK?

Judie: “I recognise it myself, having been a journalist in Kenya for around 16 years. It is very real and I'm very happy that this study was done, because for many years nobody in Kenya recognised that sexual harassment was an issue. There is a culture in newsrooms of violence against women, and it’s mostly coming from men in powerful positions.

Unfortunately, this issue is ignored because there are very few women at the decision making table. They don't have the power to fire and hire, the men do. And because we live in a society where it is normal to objectify a woman, when these issues are reported to these men in power, they don't take it seriously. So it is a dead end. That is the biggest issue that we are fighting with. There's a lot of cover up because the people in power are the same men who have been perpetrators themselves.”

What are the consequences of this issue on the careers of women journalists in Kenya?

Judie: “They quit. I used to be a political reporter, and I also quit. The majority of women who face this are younger journalists, just starting their career, and sexual harassment is causing many to quit their journalism career early. A lot of women also decide to lay low. They try to hide and just survive to keep their job. Also because it is a rough economic time. But the vast majority leave the profession. We have fewer women journalists, and fewer of them at the decision making table because of this.”

The study also says that women journalists in general do not report the incidents in about 83% of cases. Why is that?

Judie: “These women fear to be victimized. They fear if they report it, everybody will start talking and say “this is the one who says she's sexually harassed”. Also, a lot of times nothing happens. No action is taken. In fact, people tend to look at you in a way that says ‘what's wrong with you?’ So there is a lack of action, a fear of discrimination, and even fear of losing their job. We have journalists who report sexual harassment and instead of getting help, they are fired. There is no confidentiality as well. As a result, women are afraid to report because they know what has happened to other women who did that.”

What can be done to lower that percentage of women who are afraid to report?

Judie: “Free Press Unlimited helped us see that it is important to focus on the victims who have gone through sexual harassment, instead of just documenting it and pursuing the perpetrators. We never gave the women a platform where they could talk about what they are going through. We were not able to give them psycho-social support.

Together with Free Press Unlimited we set up these peer to peer support groups. At first, I was not sure whether women journalists would be willing to come. Because they are generally so afraid. They did come, but they were asking, ‘can you assure us this is just going to stay here, so that I'm not going to lose my job?’.

We reassured them that it is a safe space, that we want to document these cases so that we know better what action we should take against it. We now want to organise this every quarter, to give women journalists a platform where they can come together and discuss issues that are affecting women in general, not just sexual harassment.”

What is the impact of these peer to peer support groups?

Judie: “For us this idea of a safe platform in the form of support groups, is a prayer answered. For so long we wanted to do something for these women, but did not know how. These support groups are going to help these women to reclaim their confidence. There is a journalist who will come to the next support group. She was raped at gunpoint by her editor and the editor was fired. So the persecution process was completed, but after that nobody cared about what she was feeling. And this is the first time she is getting psycho-social support, almost five years after the incident took place. The participants of these groups are very excellent journalists, who have been rendered useless because their rights are violated, and because they have lost confidence in themselves. They thought the world did not care about them. This project is a reassurance that hey are cared about.”

Lilian: “After we started the peer to peer support groups with Free Press Unlimited, we saw women asking for reporting mechanisms themselves. Following up on that, we developed our own monitoring tool. This helps us with reporting and documenting incidents, and monitoring the situation. Another wish we have is setting up a toll free line where people can report incidents anonymously.”

What is the role of men in addressing this issue?

Lilian: “One of the major things we do is involving men. We want to understand what goes on in their mind when they think of sexual harassment. Do they even understand what it is all about? So we have a programme called Man to Man Engagement. We are having conversations with them, and make them champions for women rights. Not just on sexual harassment, but on gender as a whole, to ensure there is a balance in media houses. So far we have about 60 male champions who are helping us to talk to their fellow men on why there is a need to address this issue. We made them more aware of the consequences by discussing it in our sessions, namely, that it is causing a lot of gender imbalances in the media houses, and that we are seeing women exiting the media space. We are happy to see that men are very engaged, talking about the issue on radio talk shows for example, trying to educate their fellow men.”

Is there any improvement in the visibility of this issue in the media itself?

Lilian:“Yes, during the group sessions we encourage journalists to write stories about sexual harassment and gender equality issues in general. Basically just write stories about women. Because now, most of the pages or most of the airtime in Kenya is taken up by male stories. And when media does take on women stories, they are always in the negative. So we are encouraging both male and female journalists to be gender responsive. To write stories on sexual harassment, the impact that it's having on the industry, and how we can address it.

We have also provided journalists with training in conflict reporting and gender sensitive reporting. We did that in three counties, to about 65 journalists, and we really saw improvement in the writing of positive stories about women.”

And what is the future of the peer support groups?

Lilian: “This is our very first time doing this. The pilot has worked well, it has picked up. We also had a session with editors to see what their role is in protecting women journalists. Another session was with experts, including counselors, psychologists and representatives of the media, to help us understand how to better address some of these issues. This all went really well. Now we will continue organising more official peer to peer support groups, bringing together women journalists and help them get support. Once this is successful, we will replicate it in other areas of the country, not just in Nairobi.”

Some women of the peer support group were brave enough to speak out. Watch it below.