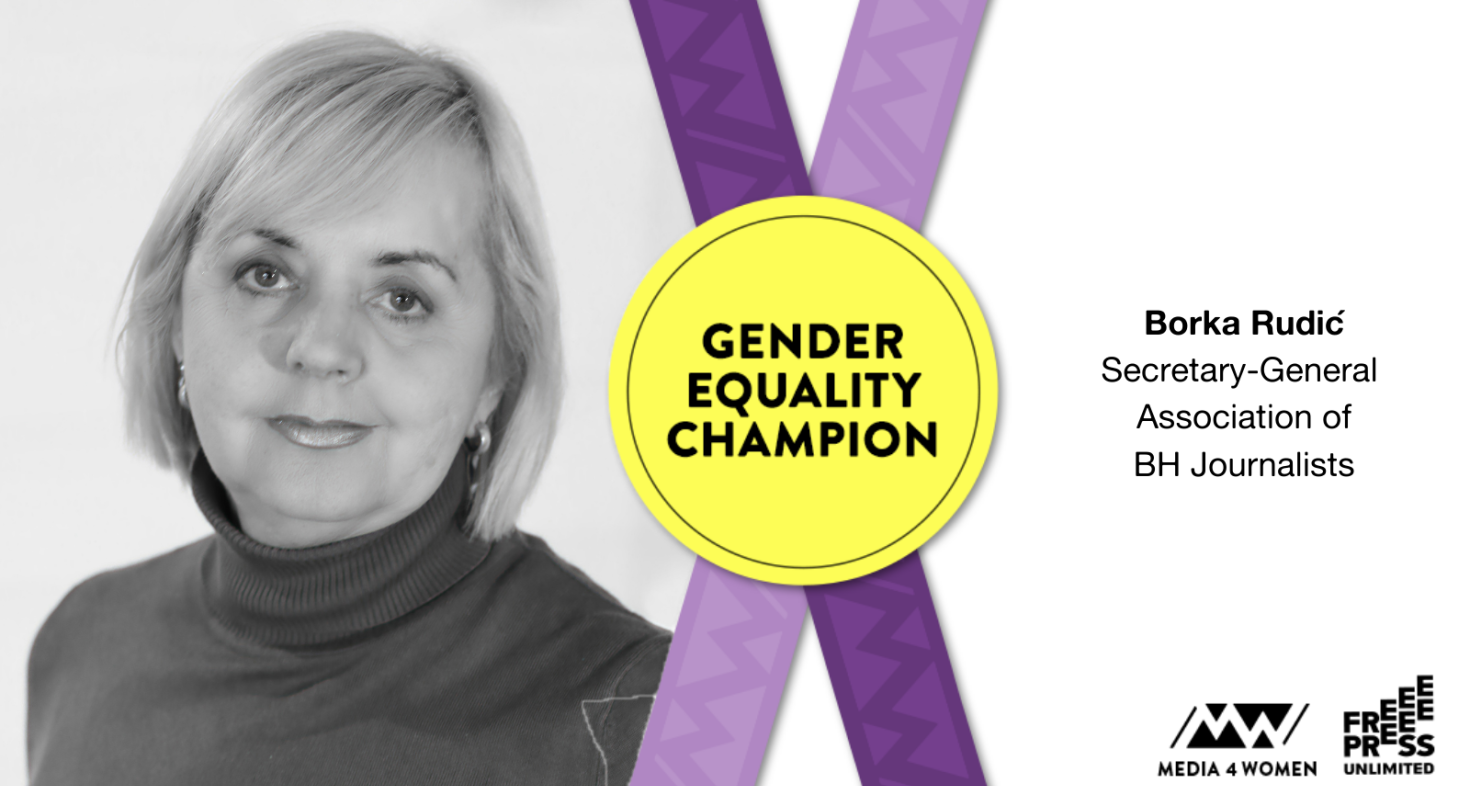 During the Media4Women campaign, we highlight Gender Equality Champions: people who lead the way in working towards gender equality in the media. One of our champions is Borka Rudić, Secretary-General of the non-profit Association of BH Journalists (BH Novinari), based in Sarajevo, Bosnia-Herzegovina. “A big problem is the impunity for online violence against female journalists, and journalists in general.”

The Association, also known as BH Novinari is a non-political entity, supporting its 700 members with legal assistance, education and advocacy. Part of BH Novinari’s work includes monitoring and protecting women journalists’ rights, with a focus on online harassment, and publicly advocating for their rights within media outlets and within the public spac. Through the Free Media Helpline, BH Novinari monitors cases of all types of violence committed against women journalists and provides free legal support, including psychological help. Borka leads the organisation with passion and pride.

What can you tell us about the current situation regarding the harassment of female journalists in Bosnia-Herzegovina?

If you reflect back on last year, what was the most challenging aspect when it came to  addressing online and offline (un)safety?

BH Novinari therefore proposed amendments to the law with a focus on criminalising violence against journalists. We sent out these amendments to all responsible institutions, and I hope that they will accept our proposal to improve this legislation, which can then lead to decreased impunity.”

You mentioned that 43% of the attacks come from politicians or public officials. What do you think is behind that?  Also, how do you think that this can be changed?

“The problem in Bosnia and in the Western Balkan states in general, are the remnants left by a communist society, when we had a long lasting culture of control on media freedom, and the still existing patriarchal culture. This also resulted in a special position of judges and prosecutors, they are feeling as an untouchable elite in our society, that does not tolerate any objections or criticism of its work.

And it's a two-sided problem. The judges in our judiciary system are also not educated on gender issues. We have a lot of stereotypes about female journalists and women in general in our society, and these stereotypes are supported through the judicial and other institutions. In our culture it is not normal to publicly stand up for women’s rights. We try to change the attitude of politicians towards female journalists, because we need more visible action by public officials to change this culture. Right now we do not have enough common action by men and women in politics in Bosnia to act against violence.”

Who are your allies in this fight?

BH Novinari also studies the position of women journalists working in various media outlets. Can you tell us more about that?

“Overall, we see that we do have more women than men working in the media, but we do not have enough women in decision-making positions. Only 24% of women in Bosnian media have a leadership position. Another thing that we see is a trend of friction between younger and older generations of women within media outlets. There are two reasons behind this. One is the patriarchal culture in which we ‘value’ young women more; they are strong, can have children, and are better suited to serve men.

Secondly, the media, especially television, only chooses presenters, journalists, editors, based on their appearance and youth, not on the basis of their knowledge and skills. It's a completely stupid approach by owners of media outlets. This frustrates young presenters who feel the pressure to make use of their looks quickly, and the older women feel that their professional life is over after a certain age. They are pitted against each other.”

How do you work on this issue of discrimination in the media with BH Novinari?

Could you tell us more about the Free Media Helpline?

“We had 11 cases that were decided in favour of a journalist through the judicial institutions in 2021. That was an amazing result for us. We made progress because we kept pushing the police and judiciary institutions to be more focused on journalists’ rights. And among these 11 cases, five were related to violence against female journalists.

I think that we must work on long term goals, because we are a society that does not accept change easily. We need more time to make changes in the perception of female journalists' rights and the value of gender equality in our society. I think that it will be hard work. But I am sure that we can make progress.”