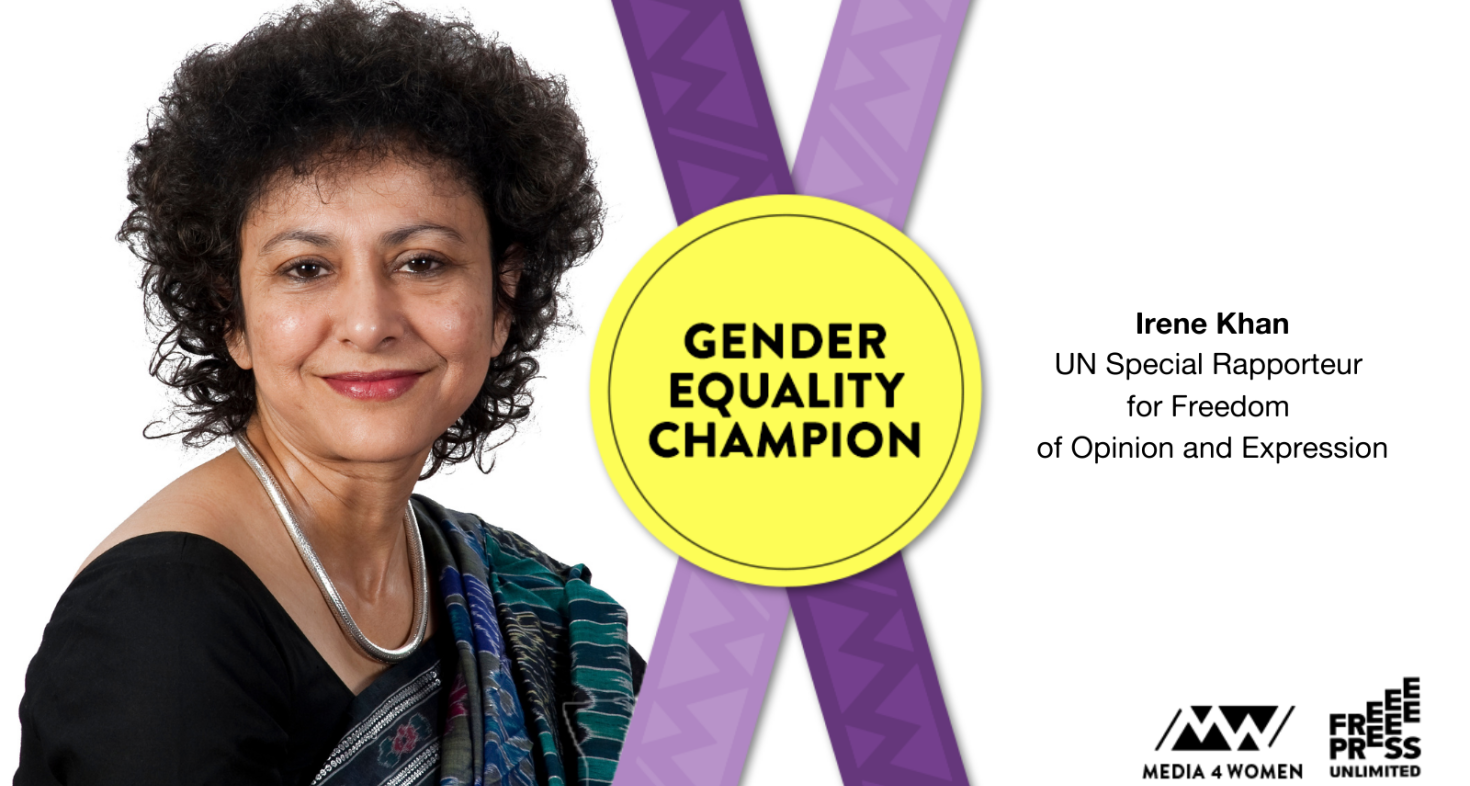 During the Media4Women campaign, we highlight Gender Equality Champions: people who lead the way in working towards gender equality in the media. Concluding the campaign as our last champion is Irene Khan, the United Nations special rapporteur on freedom of opinion and expression. “The discrimination and threats that women journalists face are a big threat for gender equality.”

As a special rapporteur on freedom of opinion and expression, Irene Khan is the independent expert appointed by the U.N. Human Rights Council, who monitors the state of freedom of expression and media freedom in various countries. She then raises the issues of governance she encounters, and reports these to the Council on the State of Media Freedom.

What are in your opinion the greatest challenges that we globally face when it comes to the suppression of freedom of opinion and expression?
“One of the biggest challenges are the threats that journalists face. The safety of journalists is under attack, and with that the editorial freedom of the media and pluralism of media. And not just in autocratic regimes, we also see a backslide in democratic countries. Free and independent media are a pillar of democracy, and democracy is under threat.”

You are the first woman to hold the post of U.N. Special Rapporteur on the promotion and protection of freedom of opinion and expression. Gender constitutes an important priority during your mandate. In your view, what are the most pressing issues that need to be addressed in this regard?
“Well, in the context of freedom of the media, I think the most important thing is the safety of women journalists, and with that the ability of women to participate in gathering news and to report freely without fear or favor. Unfortunately, women journalists are under attack online, and in the real world. They face discrimination and threats from within the news room, to their work out in the field. And that, I think, is a big threat for gender equality, as the safety of female media workers has developed into a serious concern over the years. The list of abuses and threats that women in the media receive, both online and offline, is long.”

According to a global study among 900 journalists from 125 countries, conducted by UNESCO and ICJ, 73% of the respondents experienced online violence, and in 47% of those cases it was associated with their gender, followed by politics, elections and human rights and social policy. In your opinion, what is needed to repress these statistics?
“This is a very serious problem that women journalists face, we need to take it very seriously and look at the problem comprehensively. Firstly, social media platforms need to recognize that online violence is a reality. They need involve women and take a gender perspective right from the moment they start designing their products, down to the content moderation and remedies that are provided to empower women. At the same time, they have to ensure that their products are creating a safe space for women journalists and media workers to work online.

The second thing is the government, the law enforcement, the police, the judiciary. They have to take online violence as seriously as we do violence in the real world. They need to recognise that it's a psychological attack on them. It's not just a tweet when mass mobbing takes place against women journalists, both because they are women, and because of the work that they do. They need to be protected from attacks, the law has to be more responsive and there need to be support systems.

Lastly, the media companies, the employers, also need to take their responsibility, and take serious steps to protect women. Sometimes in the newsroom, but also when they're sending them out on the street. So what we require is a comprehensive, multifaceted approach that takes online violence as seriously as violence in the real world, and that recognises that women journalists are double at risk both as women and as journalists.”

With regards to the safety of women in the media, what would success look like at the end of your mandate as the special rapporteur? And who would you like to be working with on this issue?
“I would like to work with all stakeholders, but particularly with the women themselves, because no one better than these women know what they're facing. So for me, one criteria of success would be the empowerment and the inclusion of women media workers in my work. I also believe that I will see success when there is greater awareness among the stakeholders. When states, social media platforms, and media companies all see this as a major issue, and more women decide to stay on as journalists.

The public trust in the media depends to a large extent on whether the media represents society. Women are very much a part of society, and must very much be a part of the democratic process. So when I see more women coming into this profession, and staying in it, being able to contribute to it, that is what success would look like. It's a long term effect. I'm not sure whether in three years or six years in the course of my mandate, this will happen. But this is what we need to work towards.”