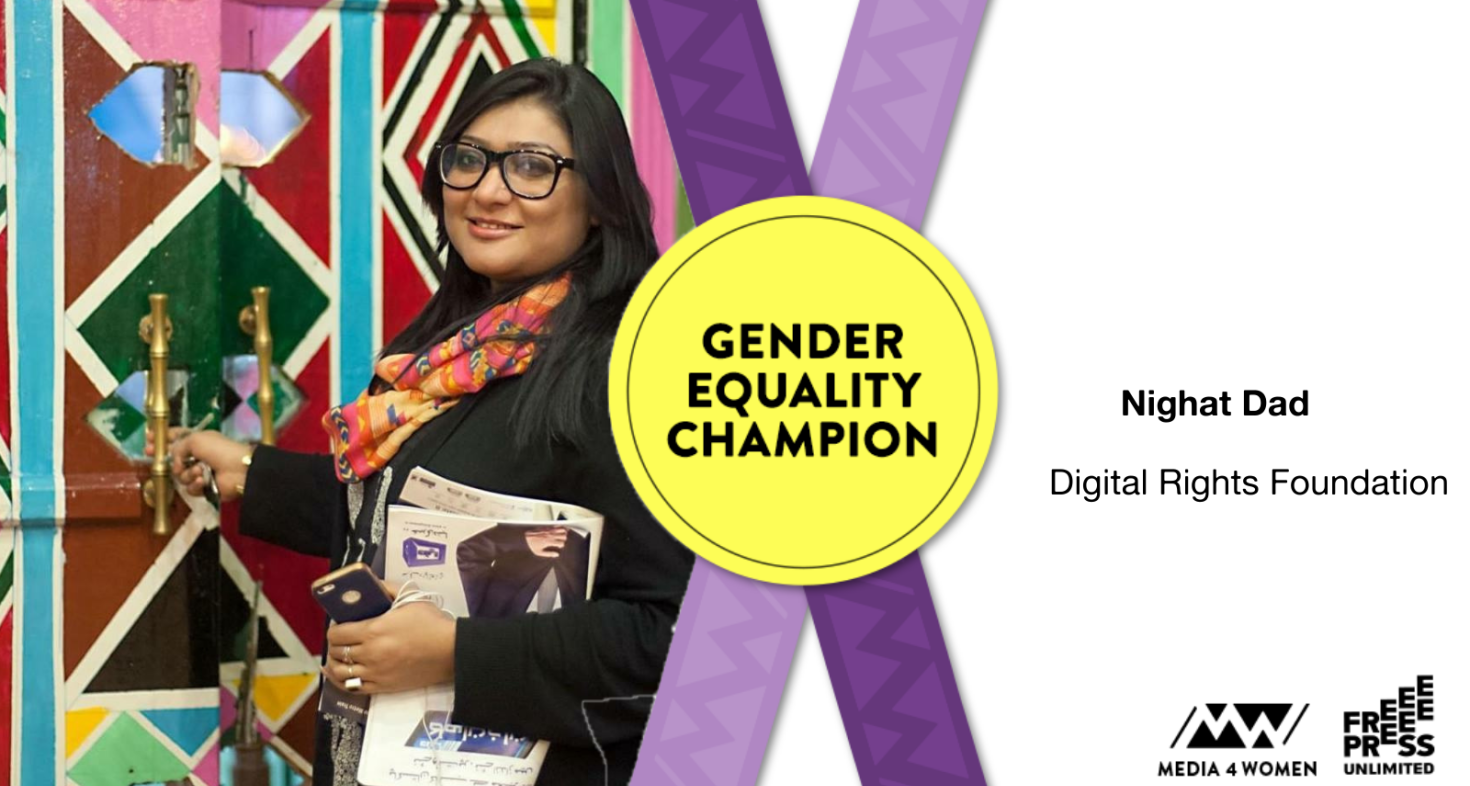 During the Media4Women campaign, we highlight Gender Equality Champions: people who lead the way in working towards gender equality in the media. One of our champions is Nighat Dad, a Pakistani lawyer who used to practise criminal and family law and is currently heading the Digital Rights Foundation in Pakistan. “It became my passion to make people aware of digital security”, she states.

Founded in 2012, the Digital Rights Foundation’s vision is to create a place where all people, especially women, are able to exercise their right to freedom of expression without being threatened. Above all, the organisation's aim is to protect women from work and cyber-harassment and make them aware of their own rights.

Right now, there is a terrible war waging in Ukraine, how do you look at this from a human rights and digital safety point of view?

"Russia's attack on Ukraine is condemnable and the human rights situation is deplorable. Following Russia's invasion of Ukraine, Russia imposed restrictions on social media platforms, particularly Twitter, as a form of censorship, violating the rights of the citizens in accessing information and news.

It is time that big tech companies proactively suspend accounts that are spreading misinformation about the situation, and that are glorifying or justifying wars of aggression and crimes against humanity. I am also deeply concerned about the physical and digital safety of journalists in general, and women journalists in particular, who are reporting from the frontline, and in doing so are risking their life, and are susceptible to intimidation and harassment. I urge those responsible to recognise that journalists have a cardinal professional duty to bring accurate information to people in conflicts and their rights must be protected under international humanitarian law.”

The Digital Rights Foundation was established nearly 10 years ago. What were you observing at the time that inspired you to start the organisation?

“Before starting the Digital Rights Foundation, women's rights in Pakistan were already very close to my heart. As a lawyer, I encountered women who were stuck in litigation cases surrounding some kind of abuse or injustice. At a certain point, I realised that litigation is one thing, and working with survivors of abuse is another thing, but when you have a platform where you can address the multiple aspects of these issues, you can really make a difference.

Then, around 2009, the internet was becoming really big. It fascinated me. I bought myself a computer and got an internet connection. This opened up a whole new world to me, but also opened the door for receiving prank calls and unwanted messages. I started thinking about what I could do about this, it was uncharted territory.

I started to study internet governance and was very aware of the fact that you need to be careful around your devices. People used to make fun of me when I said that you need to be digitally secure. That was discouraging but at the same time, I was determined to push for this. It became my passion to make more people aware of digital security. And that's when I started the Digital Rights Foundation.”

“Yes, absolutely. We look into how technology can be a tool of empowerment, and if we use it innovatively, how technology can change people’s lives. We are not just addressing women’s digital security issues or incidents of harassment, but also building their knowledge and increasing their capacity to understand how to use technology more securely. At the same time, we look into how we can define our relationship with technology, specifically looking at our civil liberties. There are few people in Pakistan who connect our civil liberties with technology or with social media platforms, including the people in charge. And that can lead to bad precedents, where the full blame is on technology which leads to restrictions being placed on it.

I'm not anti-regulation, however, I'm very sceptical and cautious about having more regulation regarding the internet. Because in my experience, the more the governments are making these laws and regulations, the more they are trying to control the internet in the name of protecting vulnerable communities, including women. The focus is on banning and censorship, but not really on addressing the root cause, that the harassment on the internet is actually coming from the mindset that we have in the offline space. It's not something that just the technology is doing, it’s a structural problem. Censorship or making regressive laws do not address this issue.”

“Many civil society organisations around the world have identified the flaws and problems with these tech giants and their community guidelines, and how they are addressing the issue of online violence or hate speech on their platforms. So they know the issue, the problem is the lack of willingness and lack of accountability.

They are earning so much money out of users' data, their job is to put some of these resources into addressing all these issues, for example by looking into their policies. And keep checking themselves. I do think stronger mechanisms are needed for them to actually listen to institutions’ recommendations, and push them towards accountability. That’s why I became part of the Facebook Oversight Board, to not scream from outside the corridors, but to sit at the table and tell these companies how to make themselves better.”

Do you think that politicians and policymakers have enough understanding of how these social platforms work, how they function, to be able to effectively address all of the issues you mention?

“I used to think that it's just us, in countries like Pakistan, where policymakers are still getting the hang of it, but policymakers all over the world are lacking knowledge. They really need to get up to speed about where technology is going and what these platforms are doing. And also realise the impact that the content on these platforms has on countries' democracies. Policymakers around the world really need to make it a priority to understand and debate these questions.

Another thing is our judiciary: judges who are actually dealing with cases that involve these issues in the courts. In Pakistan, we see so many court cases involving technology, where they are deciding the intermediary liability. For instance, the liability of admins in WhatsApp groups or Facebook groups. Judges need to have that understanding, that their rulings set a path for policymakers in the long run on what kind of laws and regulations they are going to make when it comes to technology.”

When raising awareness for the safety of women journalists, people sometimes make the point that women being attacked is a sign of equality because men are also attacked. What would you say to that?

For many people, being harassed or trolled online is relatable. You probably have to deal with it as well. How do you personally deal with harassment and trolling?

“I think over the years I have normalised it, which is actually not okay. What I have done myself is mute my own tweet, which is honestly a very uncomfortable feeling. Then the conversation under that tweet automatically doesn't alert me. That's one way of dealing with it. But there are also a lot of other ways that people reach out to you, and call you names, or threaten to do this and this to you, and you cannot avoid that. Then I look at the bigger picture. I'm like, all right, this is my job, and that's why I'm getting this abuse. I report this abuse regularly to the platforms, and sometimes to law enforcement as well. But it happens so often that you are starting to be okay with it, which is not okay.”

Concluding the campaign as our last champion is Irene Khan, the United Nations special rapporteur on freedom of opinion and expression. “The...