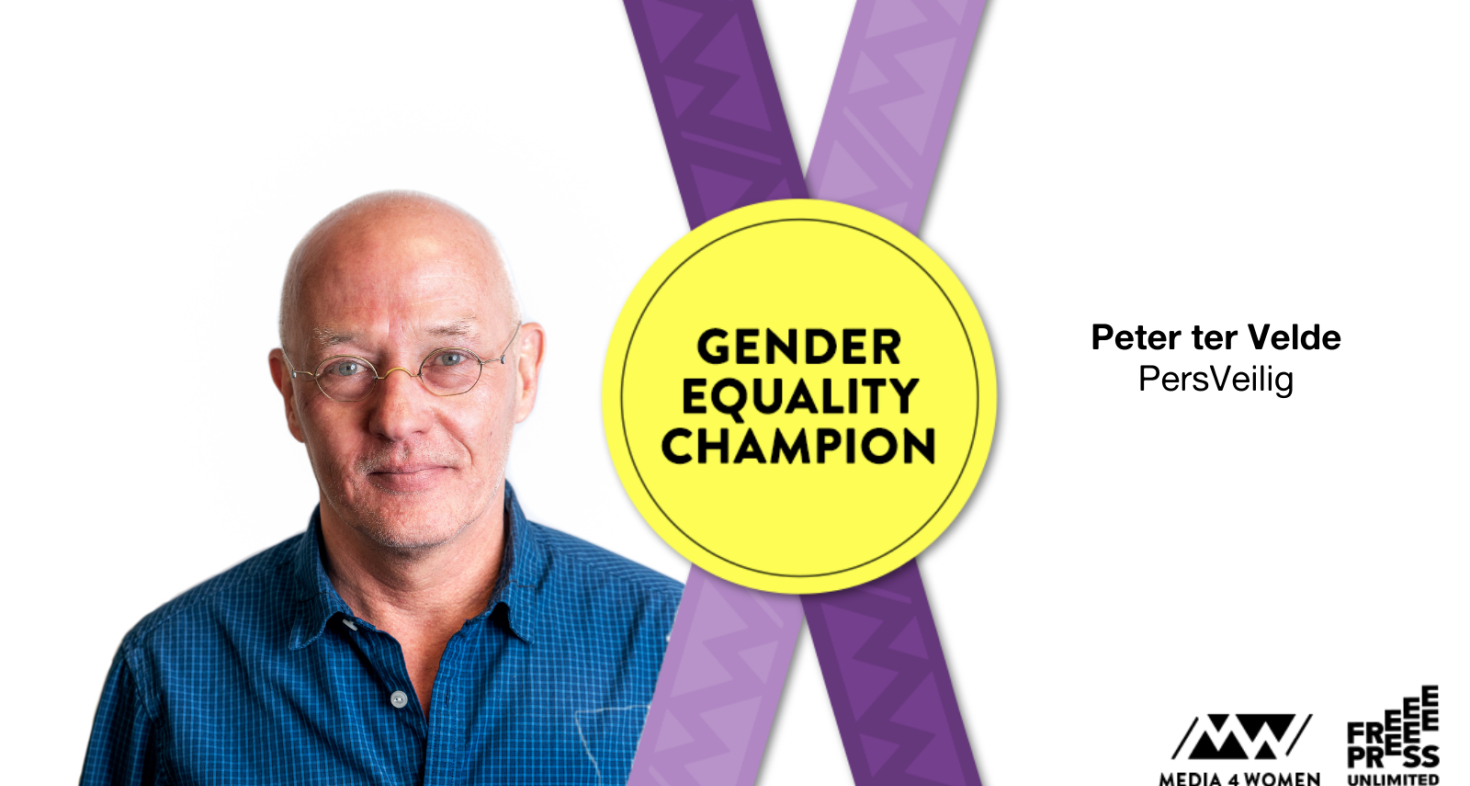 During the Media4Women campaign we highlight Gender Equality Champions: people who lead the way in working towards gender equality in the media. One of our champions, Peter ter Velde, is project manager for the Dutch organisation PersVeilig (Press Safe), “We see that women journalists are attacked much more on the fact that they are women, than men are on them being men.”

Peter ter Velde traveled as a reporter for the Dutch public broadcaster NOS to various war and crisis areas. In 2019 he became project leader of PersVeilig, an initiative of the Dutch Association of Editors in Chief, the Dutch Association for Journalists, the Public Prosecutor and the police to reduce violence and aggression against journalists in the Netherlands. Something that seems to be needed more and more.

PersVeilig was established to monitor the safety of journalists. What does PersVeilig do, for example?

“We monitor by means of a hotline where journalists can report incidents. We do this to get a good idea of what is happening in the country, but also to see whether there are certain developments that need to be responded to.

PersVeilig represents the journalistic sector with the association of editors-in-chief as the employers side, the NVJ as the trade union for the employees, but also the police and the Public Prosecutor. This gives us very short lines, also to authorities, to help journalists. We help journalists with protective equipment that they can use on the street, such as a safety vest, but also at home, such as a camera system. Finally, we also have lawyers who can provide assistance, and a psychologist who can be deployed to give journalists psychosocial support.”

You also provide training, for example in online protection. What are you trying to pass on in this training?

“In general, I find journalists quite naive when it comes to using social media. They share a lot. In all training courses we do, we scan the journalists who participate in them online. We take fifteen minutes to find the journalist and take a look at their social media profiles. It often happens that within ten minutes we know where the person lives and who their relatives are. Journalists often simply do not know the privacy settings of social media. That is what the training is about, among other things, about digital security such as using a password manager, using Signal instead of WhatsApp, or 2-step verification.”

What needs to happen in society to take online violence against everyone, but especially journalists seriously?

“I think that the big-tech companies have a responsibility to do something about this. We still get zero response when we raise an issue with Twitter, there is no one I know by name and whose phone number I have. That has really changed with Facebook. There is movement there, also at Google, where there are people who I can call when something is wrong. In a number of cases, Facebook has removed a post in no time after a phone call. With Twitter that is still impossible, there is really no movement and that is very annoying. Because of course they do have a responsibility. Officially they have it all beautifully written down on paper, but if you ring the bell, they don't answer."

“A few weeks ago I was in touch with a woman who worked as a freelance journalist who, after many attacks online, just couldn't take it anymore and decided to leave journalism. We see that women journalists are attacked much more on the fact that they are women, than men are on them being men. This is reflected in the reports we receive.

With men it is different, men are also dealt with harshly, but in a different way. With a woman it is often about their appearance, and it’s sexist. And if it's someone who's black, it's often racist too."

You often hear it said that online violence can lead to violence in real life. Do you notice that?

“It's hard to say whether physical violence is a direct result of something that happened online. But words certainly matter. Look, ten years ago nobody knew the term fake news or mainstream media until Trump started using it. They have now become commonplace in our society. About five years ago, when I saw stickers on a lamppost near my house with 'NOS [Dutch public broadcaster red.] = fake news', I was very shocked. So of course words have consequences. But also the changed attitude towards journalists, that is with more aggression and threats, certainly has to do with a climate that has arisen under the influence of a number of politicians. Some have gone along with Trump's rhetoric and that has implications for what journalists are going through today.”

What advice would you give to women journalists?

“First, if you're being attacked as a woman journalist, including online, please don't try to make it personal. It's not about you, but about journalism in general. Journalism is attacked the moment you are attacked.

In addition, I think that employers, together with us and the association for journalists, should also stand behind the women journalists when they are attacked, and support them in every way possible. Because a woman journalist who is attacked so directly on her womanhood is very vulnerable at that moment.

That to me is the crux of the matter. I heard several years ago about a woman journalist who was attacked online on Saturday, and didn't hear from her employer all weekend, and only on Monday when she got to work was told, "So you were having a tough weekend". That is not okay. You must take immediate action to support and protect that person. That is still lacking regularly, they are often insufficiently prepared for it.”

What do you notice about the impact of online threats on (women) journalists?

“A while ago I received an email from a woman journalist who had been attacked online six months earlier. And only now she contacted us, reported it, and wrote that it still bothered her. She also indicated that she needed help. She said that she had been living with her boyfriend for months now because she no longer dared to come home. So it had gotten under her skin. Those attacks were "only" a few days in January, and then it was over for the attackers, but not for her.

Then we immediately took steps to provide assistance. And she is doing very well now. But that is actually what an employer should do the moment someone is attacked, immediately offer all the help there is, or even do a publicity statement to indicate that what happened is really crossing the line, and that you fully support this employee. There is still quite a lot to gain there, it is often ignorance on the part of employers to set this up. They just don't know how to. And we as PersVeilig can help with that.”