These are the winners of the Free Press Awards 2022

The winners of the Free Press Awards 2022 have been announced today, 16 November, during a special event at the Eye Film Museum. The winner of the Newcomer of the Year Award is British journalist Antonia Cundy. The Most Resilient Journalist Award has been presented to the late Mantas Kvedaravičius and Hanna Bilobrova.

Watch the presentation of the Free Press Awards here:

Watch the panel on impunity here:

Every year, Free Press Unlimited honours two outstanding and brave journalists with the Newcomer of the Year Award and the Most Resilient Journalist Award. The 2022 winners of each award were announced after a screening of one of the IDFA documentaries: Mariupolis 2, as part of an extended programme.

Mariupolis 2 shows the Russian attack on the city of Mariupol and the impact it has on the people who live there. The Lithuanian filmmaker and anthropologist Mantas Kvedaravičius had already documented the city and its people back in 2016 for the first Mariupolis, and came back in 2022 after the Russian invasion. There, Mantas was killed in early April by Russian troops while making the documentary. His fiancée Hanna Bilobrova managed to escape with the footage. After his death, Hanna, and the producers and crew, gave their all to edit his final, unfinished film and show it to the world.

For the first time in the history of the Free Press Awards, the Most Resilient Journalist Award is being presented to two journalists: Mantas Kvedaravičius and his lifepartner and colleague Hanna Bilobrova, who collected the award in person in Amsterdam on behalf of both.

Mantas was a great filmmaker, drawn to document the impact of war on the everyday life of people. With this goal in mind, he went back to Mariupol this year, which lead to his tragic death. Hanna risked everything to make sure his work was not lost, and persevered under the most difficult circumstances. She saved the footage and finished the documentary, so the world can witness the story of Mariupol. In recognition and commemoration of Mantas’ important work, and Hanna’s resilience, they are awarded with the Most Resilient Journalist Award of 2022, that comes with a cash prize of 10,000 euros. 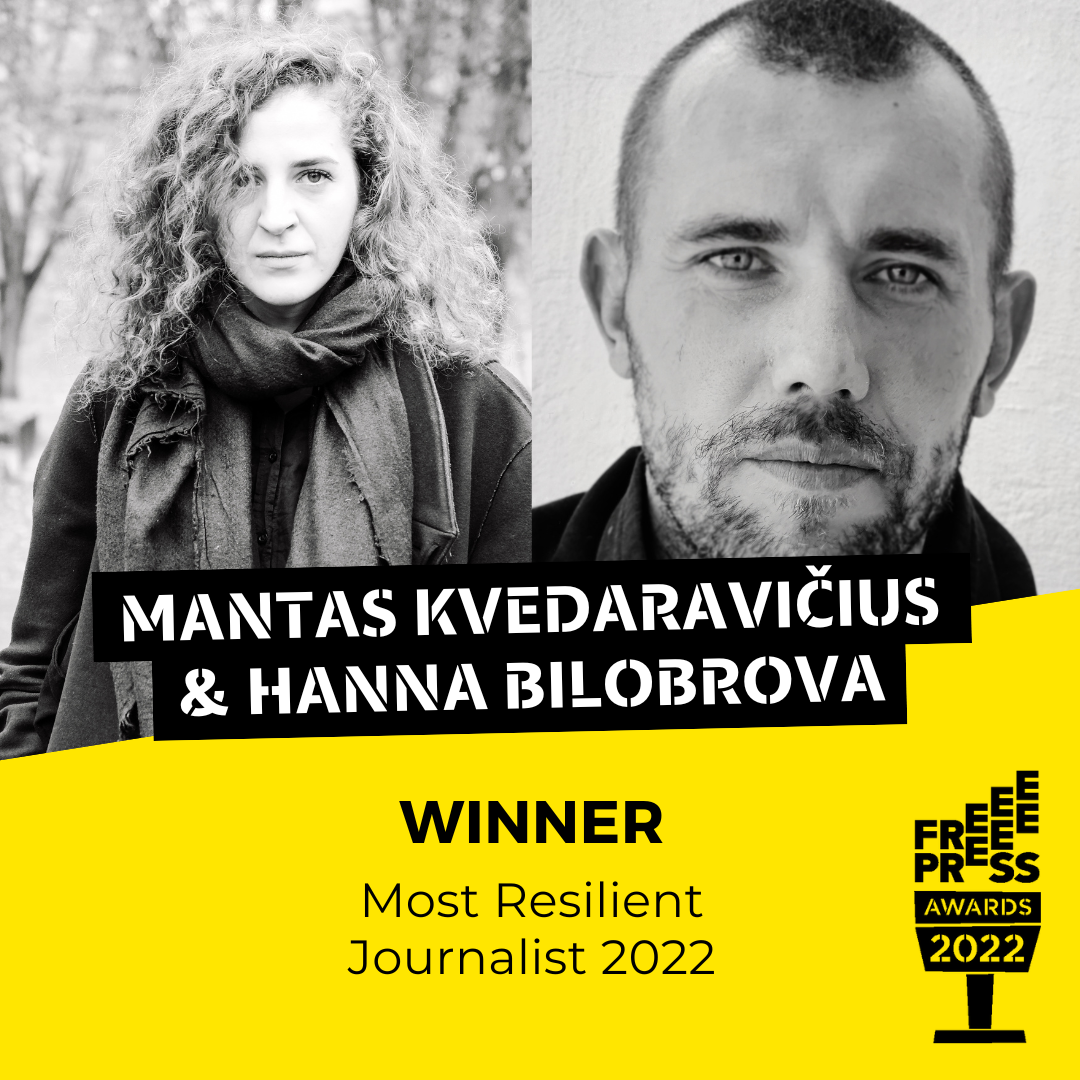 Newcomer of the Year Award

The winner of the Newcomer of the Year - Hans Verploeg Award, and a Scholarship of 1500 euros, is journalist Antonia Cundy.

According to the jury, Antonia Cundy has shown how impactful human interest stories can be, especially in times of crisis. She started 2022 with writing a story on abused migrant domestic workers in Lebanon, which pressured the United Nations to secure them with flights back home. Then, after Russia invaded Ukraine, she did not hesitate to go there and report on the impact of war.

One article about equipment shortages in Lviv hospitals led to readers getting in touch and sending tens of thousands of pounds worth of equipment to the hospitals mentioned in the article, and to others. Overall the jury welcomes journalists like her who create awareness on the human impact of conflict, to remember that it is often the civilians who suffer the most, and to make sure they are not reduced to numbers. Journalists like her give insight and make something that happened in another part of the world relatable and understandable to others.

To support the future journalistic career of this very promising young journalist, Antonia Cundy is awarded with the Newcomer of the Year Award of 2022. 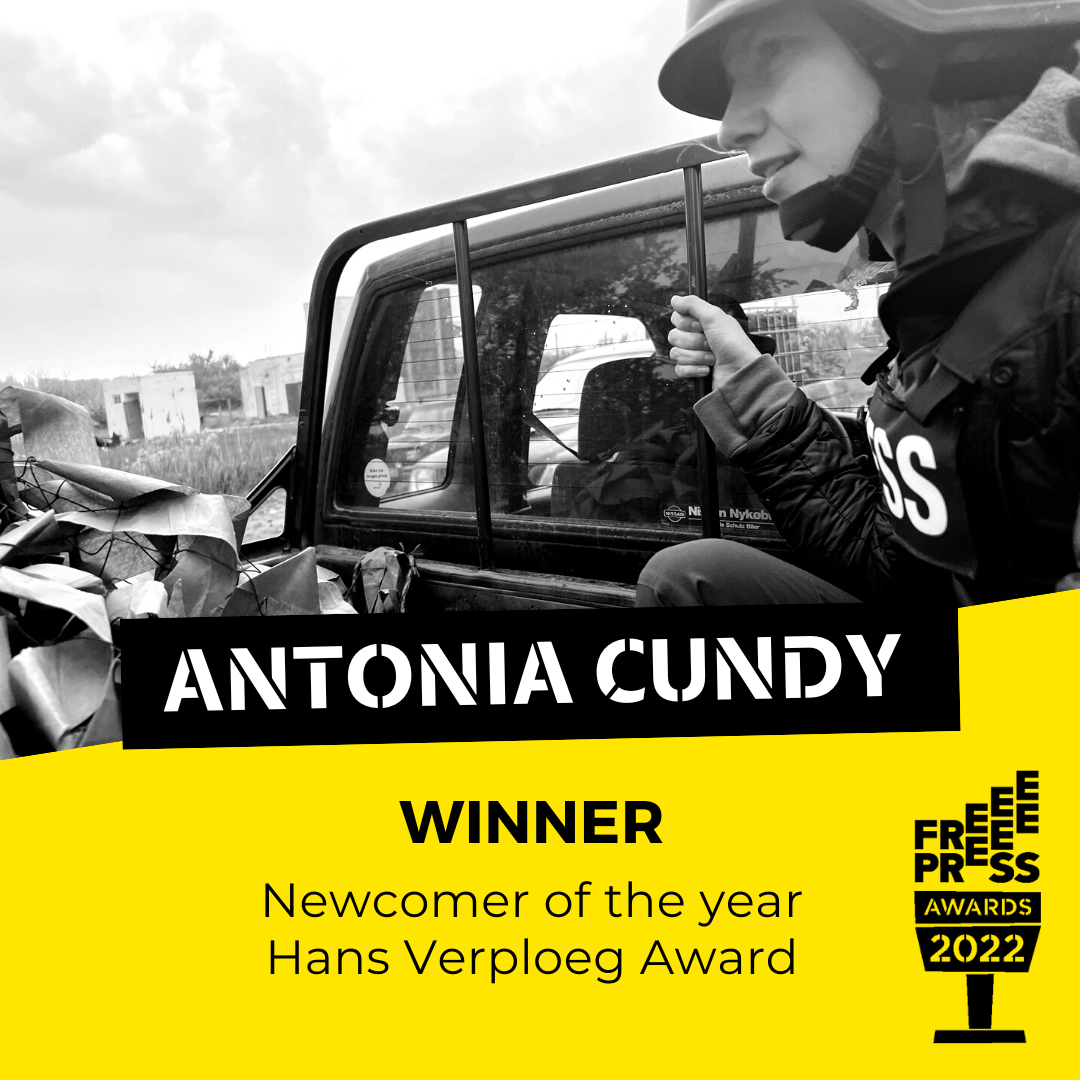 You can now nominate a journalist for the Free Press Awards 2022!

Nominations for the Free Press Awards 2022 have officially opened! This year we will once again honour a Most Resilient Journalist and Newcomer of the...

These are the winners of the Free Press Awards 2021!

The Free Press Awards recognise journalists and media professionals who have a strong commitment with press freedom and independent information. Durin...

The nominees of the Free Press Awards 2021 are…

The Free Press Awards recognise journalists and media professionals who have a strong commitment with press freedom and independent information. We...