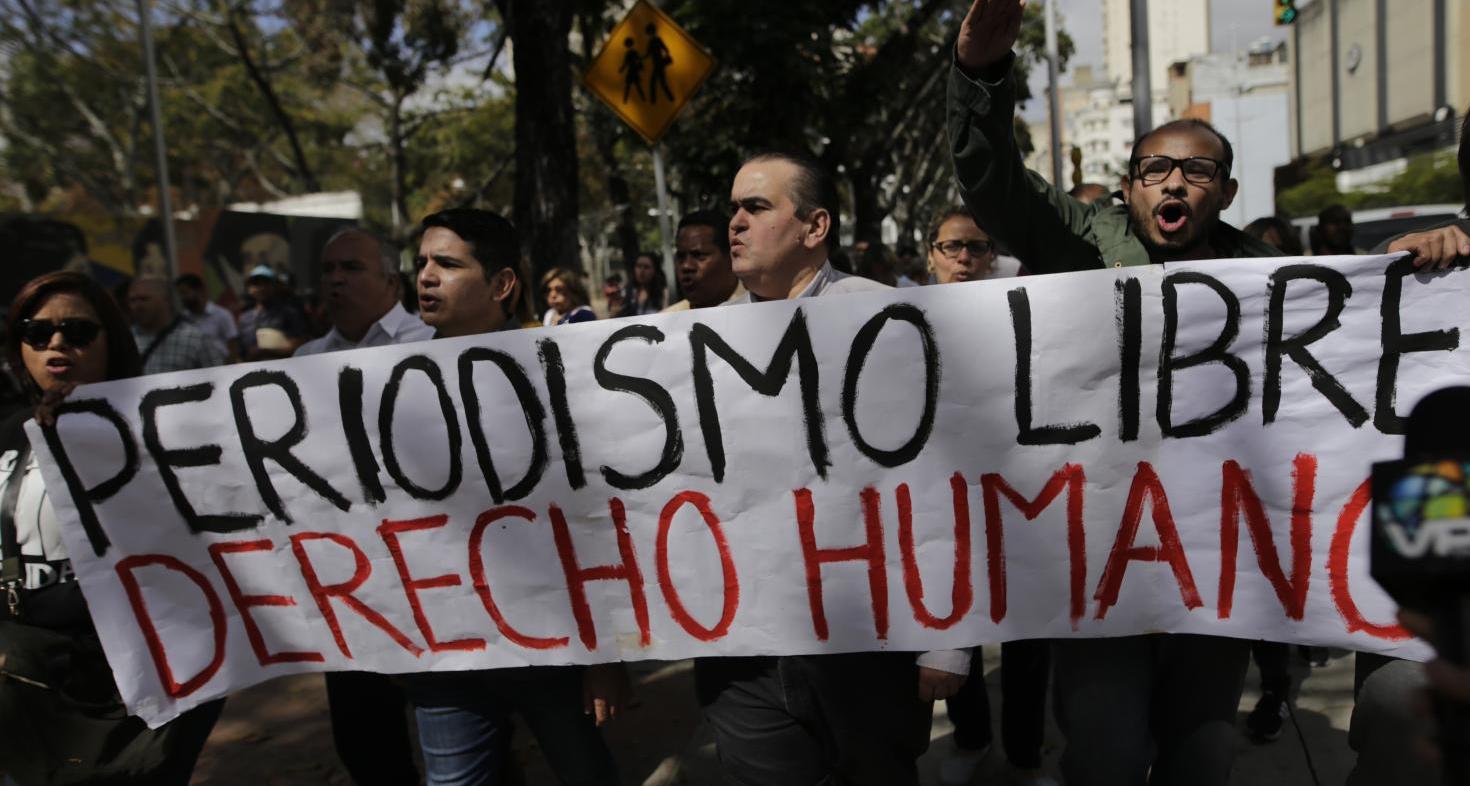 Jesús Medina was taken on 29 August 2018. He was at a metro station in the Venezuelan capital Caracas when armed men appeared. They pointed their guns at Medina’s head and grabbed him by the throat before bundling him into a car and driving him away. He would be held for 16 months on charges including criminal association and inciting hate. Medina is one of the journalists who has borne the brunt of Venezuela’s deepening political, economic and humanitarian crisis, which caused millions to flee the country. Meanwhile, the Venezuelan regime stifles dissent by silencing independent voices.

Medina works for Dolár Today, a news website critical of the Venezuelan government. After his capture, he was incarcerated in Venezuela’s Ramo Verde military prison. For three months, he was kept in isolation, taken out twice a day to go to the bathroom. It nearly drove him mad. “There were moments when I banged my head against the wall. I would scream at the guards,” he said. Eventually Medina was moved to a normal cell where he could interact with other inmates, but the inhumane treatment continued. “They tortured my fellow inmates in front of me; gave them electric shocks and attacked them. It was physical torture for them, and psychological torture for me,” he recalled.

Throughout his incarceration, Medina received financial help from Redes Ayuda. The Venezuelan organisation runs a legal and emergency assistance programme, funded through Free Press Unlimited’s Legal Defense Fund (LDF) and its emergency fund Reporters Respond (RR), with additional support from the Committee to Protect Journalists. In 2019, Reyes Ayuda financially assisted six Venezuelan journalists with support from Free Press Unlimited, including assistance with legal costs, temporary relocation and medical support. Globally, 102 journalists and media workers received aid in 2019 from RR and 195 from LDF, both directly and through local partnerships such as Redes Ayuda.

Freed, but not free

Redes Ayuda was founded by Melanio Escobar. “It’s a really dangerous time for journalists in Venezuela. They get death threats, they’re followed and monitored by the security forces, they get incarcerated. We were able to help a lot of people with this fund,” he says. For Medina, the financial support offered some relief from the horrible conditions he faced: “My girlfriend used the money to buy food and bring it to me. It helped a lot; I was malnourished.”

After a preliminary hearing was postponed eight times, a judge ordered Medina to be tried in May 2019. Following international media attention for his case, he was suddenly released on 6 January 2020. Despite this, Medina is still not free. He is not allowed to leave the country and must appear before the courts every eight days. He doesn’t feel safe. “I receive a lot of death threats via social media. It scares me when people approach me on the street, because I think they’re going to put me back in prison.” But Medina remains committed to his mission: “Not informing is a crime, that’s my message. Journalists must keep informing.”

Free Press Unlimited also funded the distribution of 200 powerbanks to journalists – powerbanks that could be charged in a car. In 2019 Venezuela was hit by a series of nationwide blackouts that left the country without power for ten days in March alone. Escobar: “We didn’t have any source of electricity to keep our equipment working, keep filming and keep taking photos of what was happening in the hospitals, the prisons and communities. Not even cell phones were working. Thanks to the powerbanks we could continue broadcasting.”

Free Press Unlimited’s experience in Nepal goes back to 1997, and in those years we have seen Nepal making progress, mostly with its new Constitution...

Our emergency aid for journalists in Afghanistan

Since last week, Free Press Unlimited re-located 47 Afghan journalists to a safehouse because their lives were in serious danger. In addition, we are...

Insiders’ perspective: how does a journalist check news?