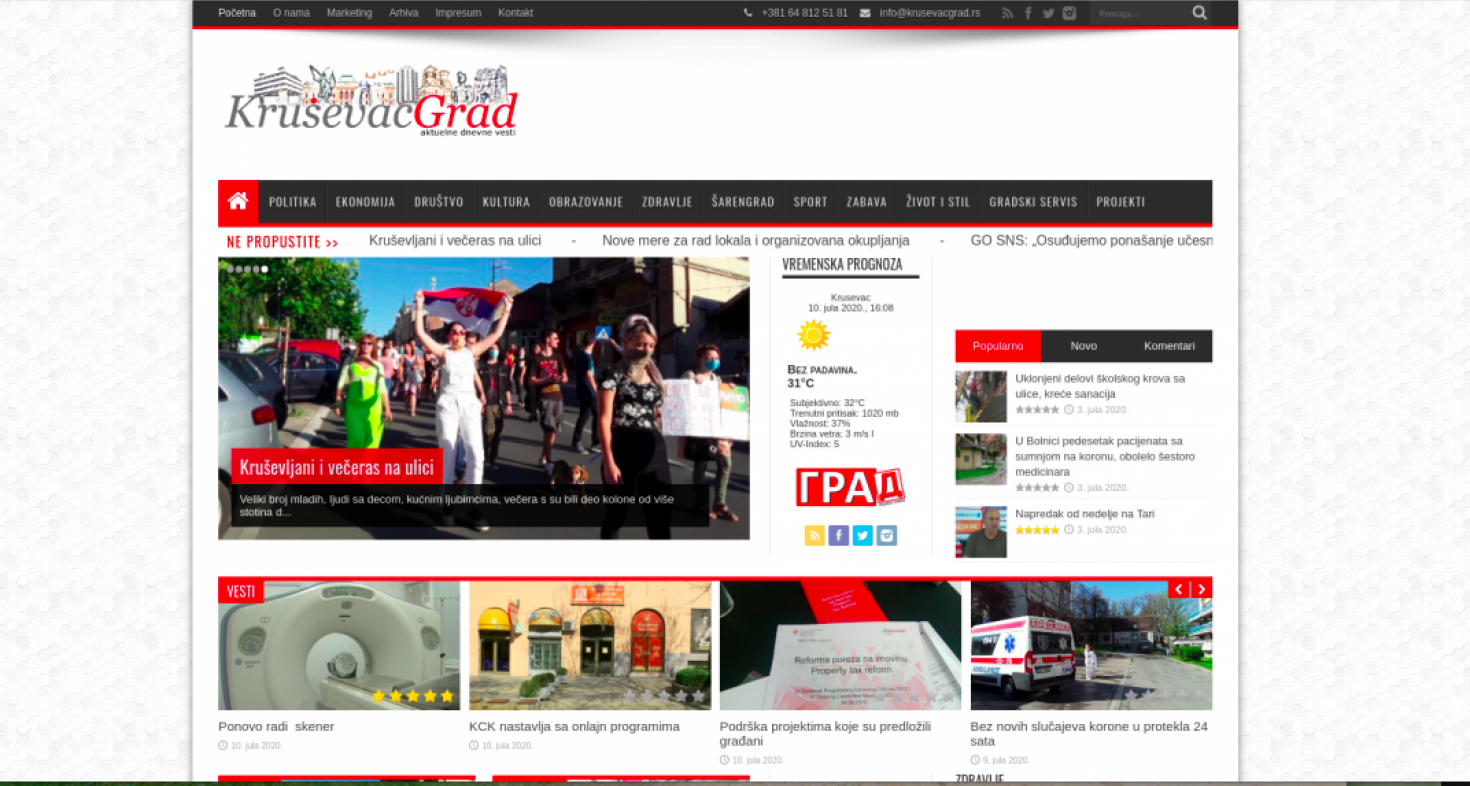 Independent journalism is revived in the city of Kruševac

At Kruševac Grad, a small but committed independent media house in the south-east of Serbia, the staff were at their wit's end after years of struggling to survive. After participating in Free Press Unlimited’s pilot project, the Local Press Lab, the tide turned for them. “If there is such a thing as destiny, I’m sure it has something to do with this story,” says Nada Budimovic, editor-in-chief at Kruševac Grad.

Nada Budimovic has worked in journalism for over 40 years. During that time she has seen the media environment in Serbia become increasingly hostile towards independent and local media houses. “I can honestly say that we defend independent journalism every day. In the city of Kruševac almost all media are either directly or indirectly in the hands of people who hold high positions in SNS, the current ruling party in Serbia,” explains Budimovic.

Because independent media in Serbia are under increasing pressure, in the fall of 2019, Free Press Unlimited set up the Media Incubator project. It includes the pilot project, Local Press Lab, aimed at strengthening the presence of four local media houses in Kosovo and Serbia. One of those media houses was Kruševac Grad. Budimovic: “Before Local Press Lab came our way, we felt exhausted and hopeless. For several years we had been fighting constantly to preserve our independence. We saw the local media scene in Serbia slowly disintegrate. Local Press Lab was a revelation to us. It brought the joy back into our work, and reminded us of why we do it.”

For four months, the Kruševac Grad team followed intensive training. An important part of the training was to show them how to increase their online presence. “We had created our social media channels in 2016, but we hadn’t really been active. During Local Press Lab we activated our social networks and learned how to work with them. After the outbreak of the Covid-19 pandemic, this knowledge became really important, because most of the information was spread through online platforms,” says Budimovic.

Reconnecting with the community

During the training, the team came up with over 20 new ideas for engaging their audience. They applied some immediately, for instance conducting online polls on local issues, and a call for citizens to send in photos of local places they hold dear. This gave the team new ways of connecting with their audience and taught them to tailor to the community’s needs. “Kruševac Grad has always stood for bringing news that is important to the different individuals in the city,” says Budimovic. “Our renewed activity on social media helped us become more visible and to start talking more with our community. The audience response to these changes was absolutely incredible.” Due to these efforts, Kruševac Grad increased its number of followers on social media channels tenfold.

However, the staff of Kruševac Grad uses more than just online means to connect. Budimovic: “One of the ideas we implemented within this project is "Coffee with journalists". We organise monthly meetings with our readers in some of the popular cafes in Kruševac to hear their opinions and suggestions on what they would like us to write about.”

Over the past few months, Kruševac Grad regained confidence, which resulted in the application for the European Journalism Center’s Covid-19 Support Fund. Out of 988 applications, 57 organisations were granted funding, among them Kruševac Grad. “For us this is a direct and unexpected result of participating in Local Press Lab. The grant is a confirmation of our credibility, and of the trust that we receive from our audience,” Budimovic says proudly.

The fund will finally bring some relief to the organisation. “We plan to use this fund to empower our office and media house in every way. Some of the money will go to paying bills and salaries; the pandemic and state of emergency caused a huge drop in our income. Most of the money will be used to modernize our equipment, increase the number of journalists in our team and to continue on this new path that we have set out on,” says Budimovic.

The Media Incubator project gives local independent journalism in the Western Balkans an important and much needed boost. In the case of Krusevac Grad, it brought back staff motivation to continue what they have been doing for the last 18 years: bringing complete and objective information to the people of Kruševac.