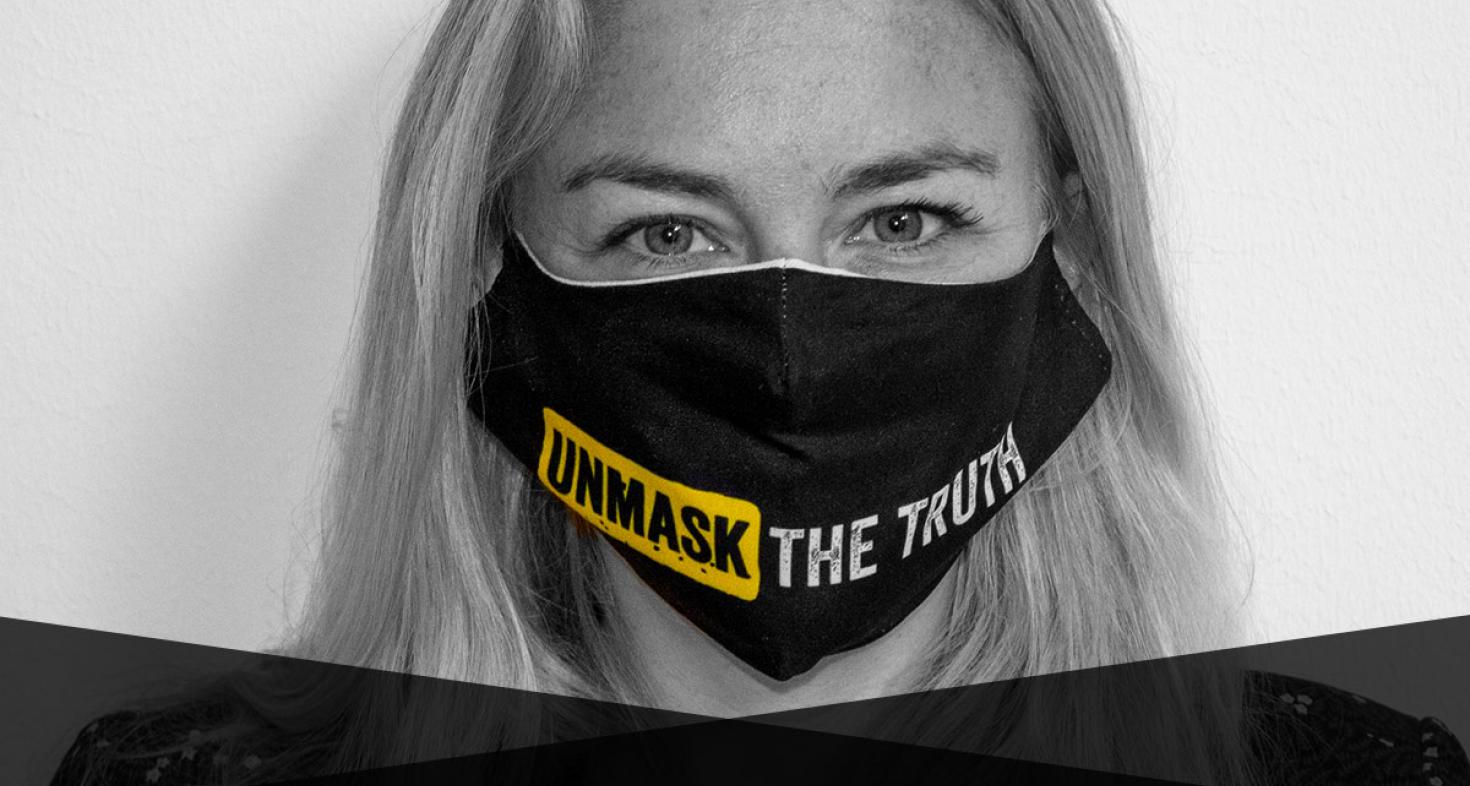 The #UnmaskTheTruth campaign is about supporting journalists who are committed to unmasking the truth. As part of the campaign we are talking with journalists about their work. This time: Sanne Terlingen. She works as an investigative journalist for the Dutch radio programme Argos, and is specialised in refugee issues, human trafficking and organised sexual abuse. She is also one of the founders of the investigative collective, Lost in Europe.

Sanne’s most recent investigation for Lost In Europe revealed that last year more than one thousand Nigerian asylum seekers disappeared from Dutch refugee shelters. A distressing story that illustrates the failure of the refugee system in the Netherlands. We talk with Sanne about the challenges of working with traumatised people, the balance between involvement and objectivity, and working across borders with Lost in Europe.

Lost in Europe is an investigative collective of journalists from different countries that tries to discover what happens to refugee children who have disappeared in Europe. This idea came about as a result of the investigation that you carried out after the death of an Eritrean asylum seeker, Kahsay Mekonen. Can you tell us more about that?
“Kahsay Mekonen lived in the refugee shelter in Leersum. He disappeared without a trace in December 2013, and was found dead hanging from a tree in Germany on 5 January 2014. The German police immediately labelled it a suicide, and the Dutch police did not investigate it. The people that were close to him sounded the alarm. They said that he didn’t even dare take the train to Utrecht because he did not understand how the public transport system worked. How could he have found his way to Berlin and then to Bremen on his own? And who goes all the way to Bremen to commit suicide?

Together with Huub Jaspers (Argos) and Hanna Möllers (Radio Bremen), I set out to investigate the matter. A year after Kahsay’s death, we visited the park behind the station where his body was found. A piece of the belt by which he was hung, was still on the tree in question. That typified the investigation: no-one had even bothered to remove it properly.

During the investigation, we noticed that the pieces of the puzzle were in all kinds of different countries. Kahsay lived in the Netherlands, but was found in Germany. We discovered that he had had an argument with a notorious human trafficker in Italy. We found that out through Kahsay's brother in Israel, who had paid for Kahsay’s trip. We also found information in Norway, where the trafficker’s sister lived, and in Eritrea.

That was how I got the idea to set up a network of journalists located in different countries, all of whom have knowledge of migration and human trafficking problems, to work together on this type of investigation. Why should a single journalist have to find his way around in all the different countries, if you can all work together? Also, an investigation has more impact when you can publish in multiple countries.”

Ultimately, you and Geesje van Haren set up Lost in Europe and the focus has been on refugee children. How did that happen?
“In 2016 Europol reported that 10,000 refugee children had disappeared after arriving in Europe. It was given very little attention. No-one even investigated exactly how many children had been lost. At that time, I shared my experiences with Geesje van Haren, and we both recognised that migration is an ongoing problem and journalists have a role to play in solving it. That took shape in the form of Lost in Europe.”

How would you describe the goal of Lost in Europe?
“The goal of Lost in Europe is to revitalise and improve investigative journalism on migration. We reveal where the system is failing or what the system cannot see yet, and the impact this has on people’s lives. We do this through a combination of personal stories that people can relate to, and a lot of research, so that the authorities are also convinced that there is a problem. Lost in Europe is able to paint as complete a picture as possible because we work across borders, and make sure that there is plenty of diversity in the team, both in terms of expertise and in origin. For example, our journalist in England, Ismail Einashe, is from Somalia and specialized in trauma. And Adriana Homolova is an excellent data journalist.”

The first story that Lost in Europe brought to light was the story of the 60 Vietnamese children who disappeared from the shelter in the Netherlands. As a result of this story, all the Dutch political parties wanted a debate and questions were asked of the Secretary of State of Asylum, Ankie Broekers-Knol. Is this what you had in mind with an investigation?
“Yes and no. I don’t write stories to achieve a specific goal. It has even been the case that as a result of one of my stories, something happened that was not exactly my solution. But it’s not up to me to speak out on what the solution should be, that’s what politicians or social organisations are for. I often make stories because I see that people are affected by an error in the system. And of course it feels good when it’s rectified after that, and it’s satisfying when the people who worked on the investigation feel like they’re being seen and heard.”

Just getting the story out there is actually why you do what you do, regardless of what happens to it next?
“Yes, that’s why you should do it. I also think that my stories have impact, precisely because my goal is always to find the truth and not to make any specific effect. That would detract from the credibility of the stories.”

I do continue to follow my stories. Secretary of State Harbers (Predecessor of Broekers-Knol red.) stated that there were no signs of human trafficking and human trade surrounding the disappearance of the Vietnamese children, but our investigation revealed that there were in fact signs. For example, employees at the shelter said that cars, literally with flashing lights, stopped in front of the shelter to pick up the children. That was also recorded in documents. Then Secretary of State, Broekers-Knol, downplayed the problem again. I wrote another piece about that. Sometimes, I am asked whether I am too involved. But it is not involvement out of activism. I have studied this, and if someone in power wishes to sweep it under the carpet with incorrect arguments, I will point out what is not right.”

A lot of traumatised people cooperate in the Lost in Europe investigations. How do you prepare for that?
"It is a challenge to build a relationship of trust. I do it by being really honest about what I, as a journalist, can and cannot do for someone. Suppose we’re talking about an asylum seeker, then I explain clearly, even if you tell me your story now, my investigation will probably not help you to get a resident’s permit.

I also create trust by making sure the other person keeps control. For example, I am careful to report back on what I want to publish, and if it’s a distressing subject, we agree to meet at a place that feels safe for the interviewee. That doesn’t mean that I don’t ask any critical questions, but when I do, I explain clearly why I think it is important to know the answer. I take these people seriously by asking and really wanting the answers. We only publish what we can verify. It is precisely someone who is vulnerable that benefits from a bulletproof story.

That’s also how I work on investigations into organised sexual abuse. I always take a colleague with me to the interviews with victims. I do that to make sure that no suggestive questions are asked."

Do you also have to protect yourself sometimes?
“I had difficulty setting boundaries. I am working on that, but it is still a pitfall. Like, for example, still answering the telephone in the evenings. I think that happens more often in heavy investigations. The problems of your sources are always ‘worse’, and then it’s very difficult to say: I just really need to Netflix for an hour now. It is also a coping mechanism. You cannot solve every problem, but you can pick up the phone. That gives a sense of control and eradicates that feeling of powerlessness a little. Once is not bad, but evening after evening, year after year, is.

To learn to deal with this better, I followed a fellowship at Columbia University from the Dart Center for Journalism & Trauma. It taught me more about working with traumatised sources and how to question them, but also how to stay standing during these types of serious investigations. You learn how to avoid getting tunnel vision because of the emotions of others, and how to avoid becoming bitter or burned out because you take the weight of the world on your shoulders.”

The murder of the Eritrean Kahsay Mekonen, the Nigerian girls who are forced to becoming sex workers, those are heavy subjects for the reader. How do you determine how to bring these stories out in the open?
“For every story, in my case, through the radio, I try to introduce a certain layering to what is being told. I try to convey what it means to the people whose story it is. By the way, in the story about the Nigerian girls, not a single Nigerian girl spoke. Yes, that is against my principles – because I prefer to let their voices be heard. But this was a story about how, for twenty years, the shelter had failed these girls. I let it be told by allowing those who have worked at the shelter since day one, to speak.

They spoke about how they had held the hands of the girls, and listened to their dreams and fears in the evening when they put them to bed. How they still feel sick when they are on holiday in Italy and see young girls, standing at the side of the road, as sex workers. I try to let people hear that this is about human beings. And then I try to embed their stories into the context – with each story that we make we at least try to get hold of some internal documents to back it up. That’s what Lost in Europe stands for. These are not ‘victim stories’.

Nicaragua: an unprecedented crackdown, right before the elections

Hostile speech, raided homes and offices, arbitrary arrests, the independent media in Latin America are suffering from a massive crackdown, even...

Today, the Norwegian Nobel Committee announced Maria Ressa and Dmitry Muratov as the winners of this year´s Nobel Peace Prize, honoring them for their...

Insiders’ perspective: how does a journalist check news?