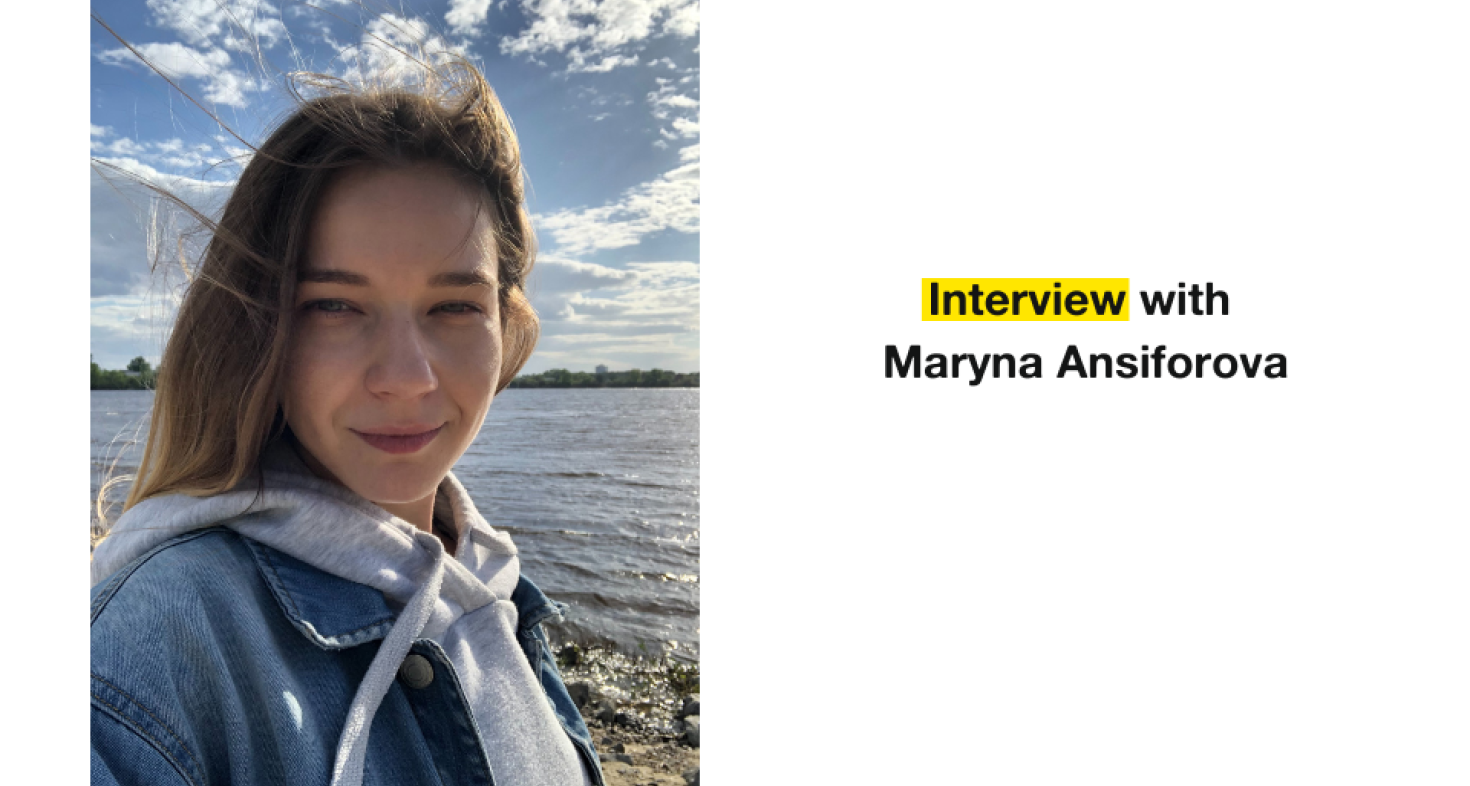 A story from Kyiv: interview with Ukrainian journalist Maryna Ansiforova

Ukrainian journalist Maryna Ansiforova won the Free Press Award for Newcomer of the Year in 2017. Since then, she has continued to do great work in journalism in Ukraine. After the Russian invasion, everything changed. However, she continues to live and work in the Kyiv region. Recently, we spoke to her via Zoom to hear how she is doing.

While meeting via Zoom, Maryna is sitting on her bed with a cup of tea in her hands. First, we talk about the weather, as one usually does under normal circumstances (it is cold where she is: 7 degrees celsius). However, these are not normal circumstances - Maryna’s country has been at war following Russia’s invasion of Ukraine almost three months ago already.

“These are very hard times for us Ukrainians, journalists and citizens,” she says when I ask her how she is doing. “We have been talking about this war before the Russian invasion started, and it seemed like 50% of the people said ‘Oh, nothing will happen. They are just walking around our borders because they want us to be afraid of them.’ And another part said that they did believe an invasion would happen.”

After the invasion started, Maryna couldn’t decide whether or not she should leave. She stayed put in a small village 20 kilometres from Kyiv, but plans to move to Kyiv in a couple of weeks.

Has this been your plan for a while?
“Well, more so now that a lot of Russian forces have moved away from the Kyiv region. We will see how it will go. It depends on the situation in the Donbas region too, because experts say that if they have some kind of strategic win in the Donbas region, they can return to Kyiv. That's why I don't know what to do now. I might decide to move somewhere else, maybe to Western Ukraine. But to be honest, I'm not ready. I'm not mentally ready to move. A lot of my friends, and a lot of my colleagues in other countries, invited me, and said, it's okay, you can stay here, but I can't accept that. Maybe I will in a couple of weeks or months. But at this moment I can't accept this for myself because if you are a journalist or if you are a Ukrainian citizen, you feel that this is your country and you should be here.

But I don't judge other people who leave. Like my sister who lived in Irpin but left to Italy to a special living programme there. Oh my gosh, I just can't imagine how difficult it was for her to go away.”

And how has it been for you in terms of access to quality information? Do you know where to get reliable information?
“It's hard to get really good, reliable information. One of the reasons is that Ukraine doesn’t have a lot of money to put into a flow of information that helps to show and explain what's going on here. We also had approximately ten main media channels in Ukraine, and now they decided to make that into one channel that has become the one informational output to inform all of our citizens. But it's in Ukrainian, it's not in Russian or in English. That's why a lot of people have a hard time understanding, especially foreigners, what's going on.

We really need to have information in different languages, because there are Russian populations in different countries, like Lithuania. I had an acquaintance from Lithuania who is originally from Russia, and he says it's so hard to understand who is wrong and who is right. He says he is still not sure that it's not the Ukrainians, because when he sees articles that write about the Russian occupiers doing this or that, he won’t even start to read because occupants is not a neutral word and that's why he thinks that these media can't be fair about these things.”

How do you respond to this?
“I try to explain to him that for us, they are occupiers, there is no neutral or not neutral. They are occupiers because they invaded our country. It doesn't mean that we are trying to sell propaganda to other people, for us they really are occupiers. And if you think that Ukrainian people have a lot of media with propaganda, then let's read sources that are not Russian or Ukrainian to have a fair view on the situation. But he is surrounded by all of this Russian propaganda in different media. I then say that he should read other sources to have a clear, transparent opinion on the situation.

But Russia spends millions of dollars to have this huge informational influence in different countries. When there has been a bombing, Russia already posted all of the information about who they say did it on Twitter. Ukraine does not have that potential, that's why it's really hard to explain the situation to someone like my Russian acquaintance.”

With Media Lifeline Ukraine, Free Press Unlimited works to improve safety of journalists and access to reliable information in and around Ukraine. What do you think would really help journalists in the region to do their work at the moment?
“I see that a lot of my colleagues are not able to work. A lot of media are closed because people moved to other countries, or they need to take care of their families, for example. So I think that all organisations that have the opportunity to provide Ukrainian journalists with funds, should do it just to help them continue their work, because now a lot of my colleagues keep writing despite everything, but for free. And then most important are the regional journalists, they are in an even worse situation because they do not have the protection of bigger media organisations that continue to operate.”

In 2017 you won the Free Press Award for Newcomer of the Year. What have you been doing since then?
“I have been reporting for a judicial platform, mostly for the financial programme ‘Our money with Denys Bihus’ that we had. Actually, the TV presenter of this programme, Denys Bihus is in the army now in the Kyiv region, as a civilian. Other journalists now make his programmes and continue his work. In 2020 I decided to analyse the procurement of mostly governmental tenders, like the construction of roads for which a huge budget was allocated. Because it was so big financially, it was important to cover the use of these funds, to see if the funds were used properly.

And then, a year and a half later, I moved into compliance and corporate intelligence. The war altered our goals, and we concentrated, among other things, on Russian jurisdiction and sanctions. Many companies from various countries that have some kind of dealings with the Russians understand that doing business with Russia is now toxic, and they are looking for the right exits. They are trying to refuse to cooperate with Russian counter parts. And we help them in this by revealing and analysing data about Russian corrupt and criminal networks.”

In what other ways are Ukrainian journalists still doing their work?
“Actually, many journalists now do this kind of work of investigating Russian connections to help Ukraine. But many of them also report about what is happening in different regions, and what crimes Russian soldiers are committing, for example in Bucha. And some report about the army techniques and strategies which is very useful.

Everyone is very busy with their work and they are very involved. But unfortunately, a lot of journalists who remain in these territories which are occupied by Russian forces, they really suffer. When Russian soldiers had entered and occupied Kherson, they started searching for the activists, journalists and politicians who weren’t tolerant to them. An acquaintance of mine had to go in hiding, and was missing for a couple of days, his friends couldn’t reach him. The Russians even got in touch with his brother to find him. Fortunately he made it out. It's insane.”

How do you, and others, cope?
“Sometimes I just try to push all of these bad things from my head and just learn or read something as a distraction because it's very hard to live with, and to feel all of this pain inside all of the time. My friends also try to go walking, or doing sports, just to take care of themselves mentally.”

What is the Ukrainian spirit at the moment?
“I think that about 90% of the Ukrainian population believes that Ukraine will win. But the question is what will the victory be. Just the borders like they were before 24 February? Or will we win in this huge Donbas struggle, or retake Crimea? We don't know now, but everyone believes that we will win.”

And how do you see the situation evolving in the near future?
“We are waiting for something that will change things up, to be honest. We can see that because of the sanctions, a lot of Russian businessmen are not satisfied by this situation. It’s a huge hope that they will try to change the situation inside the country soon, because our people continue to die and it's very hard to realise that. We don't believe in the Russian citizens anymore. At the start of all of this, we were so sure that they would continue to demonstrate to their power holders that this is not okay.

When we were a couple of days into this invasion in the Kyiv region, we tried to identify all killed Russian soldiers through a Ukrainian Telegram channel where we posted photos and identity information. Then we would write to their families with a photo and verification of the soldier to show them what is going on. We were sure that they would change their mind. That they would say ‘We should do something’. But they said ‘Oh, it's just his work and you are Nazis and this is fake’. They didn't believe that soldiers were killed here. After a while they did believe that soldiers were being killed, but they would say that it was part of the mission.

Even our relatives don't believe us. I have a brother in Belarus, where I was born, and I tried to tell him what’s going on here. And he asks; ‘Is this not fake? Because I don't believe it’. It's really heartbreaking.”

Fixers - The Unsung Heroes of the War in Ukraine

Free Press Unlimited has been supporting journalists and fixers in Ukraine in growing numbers since the start of the war, through our Media Lifeline...

Andrey Boborykin is the executive director of Ukrainska Pravda, one of Ukraine’s most well-read and visited news websites nationwide. Free Press...

Dutch freelance war reporter Marcel van der Steen has already worked in many places, including Syria and Iraq, to visualize the impact of war. In...