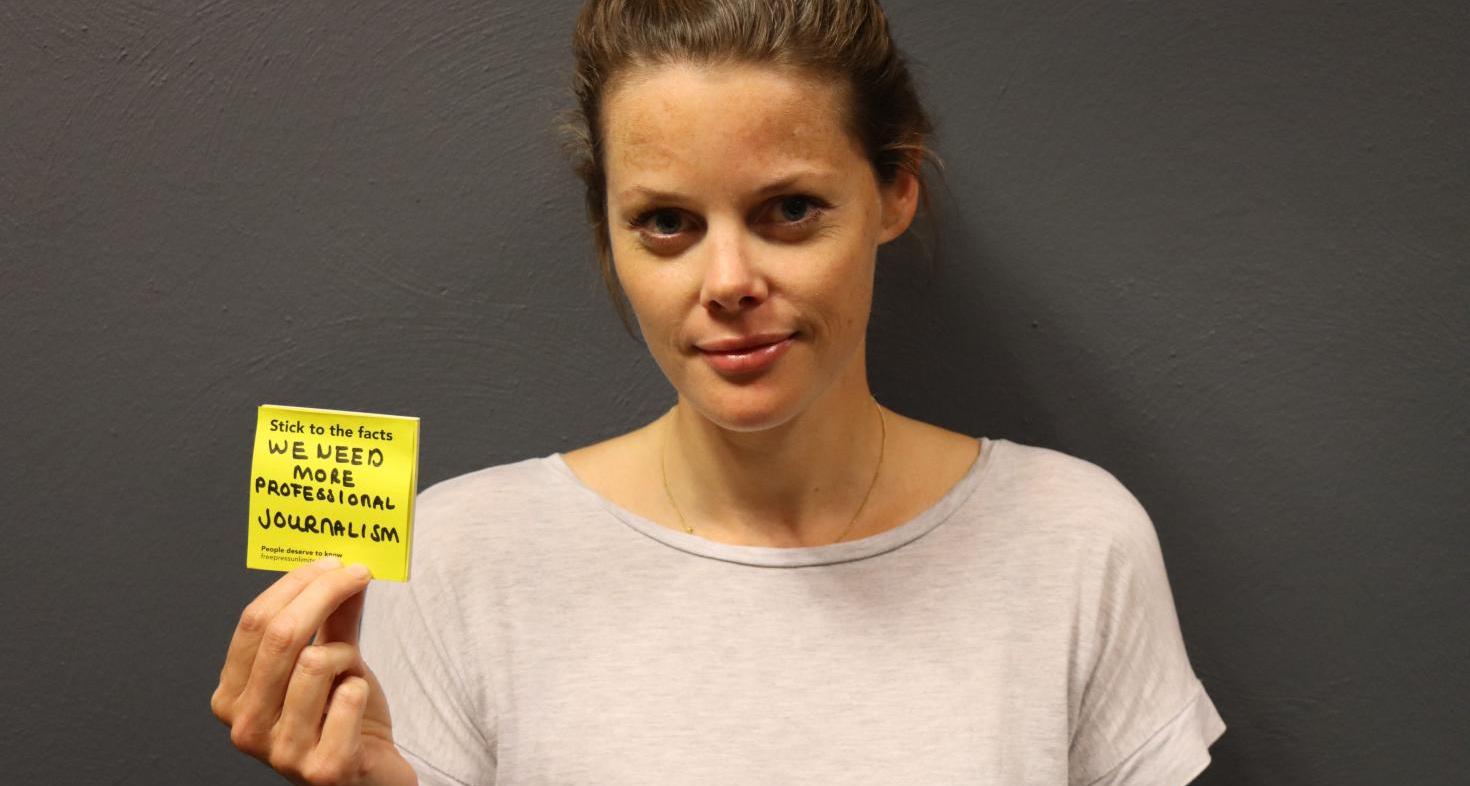 You can’t fact check disinformation away. What can you do?

Professional journalism faces a major challenge in this day and age. Fake news and misinformation are rampant. This is why we have launched a #StickToTheFacts campaign, in which we highlight the importance of sticking to the facts, as well as the importance in searching for reliable information. Evelien Wijkstra, Senior Policy & Advocacy Officer at Free Press Unlimited, explains what Free Press Unlimited sees as the best approach to tackling disinformation.

Factual news sometimes threatens to drown in the amount of fake news that circulates. The avalanche of misinformation relating to Covid-19 even caused the World Health Organisation to dub this period as an ‘infodemic’. But how do we arm ourselves against this?

First, let's take a look at the terminology. What is the difference between disinformation and misinformation?
“Disinformation refers to the intentional dissemination of false or incomplete information, for example government propaganda. Misinformation on the other hand, is about the unconscious spreading of incorrect information or fake news. The latter happens a lot on social media, where there is often a tendency to share information without checking whether it is true or false.” 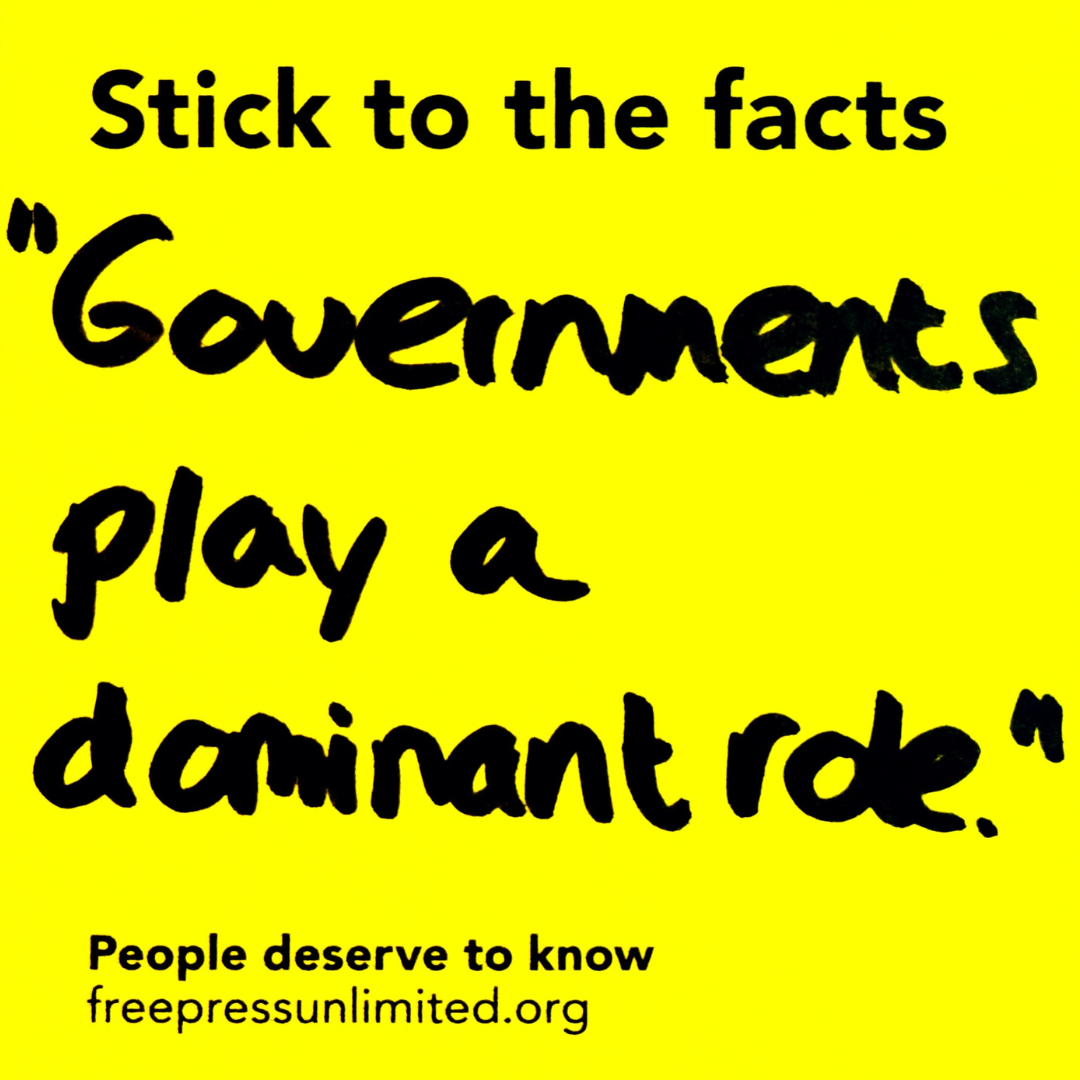 What is its impact, and is it comparable worldwide?
“Studies have been conducted in various countries to show how harmful the spreading of disinformation can be. In the Netherlands however, disinformation has a relatively small impact, due to a reasonably good media landscape and education system, which makes people less receptive to believing false messages. In countries where Free Press Unlimited works with local partners, such as Bangladesh or Iraq, the information systems are generally found to be quite weak, due to limited access to independent sources of information, and governments often doing their best to withhold information. This makes people much more susceptible to false information, and increases the impact of disinformation.

Moreover, there is no universal definition for ‘disinformation’, which makes it dangerous, also for the work of a journalist. Any journalist who might be critical about a given topic related to those in power (for example a government), could be accused of spreading ‘disinformation’ or ‘fake news’. Such journalists are often also prosecuted under such accusations, which falls under the guise of ‘protecting the citizens’.”

What further role do governments play in the spread of disinformation?
“Governments can play a dominant role in the spreading of disinformation. Whether as active disseminators themselves, or whether they are drafting legislation - the so-called fake news laws - that allows them to prosecute certain people who, in their view, are spreading fake news. Governments also play a role in access to information. Governments have a duty to make available information that is of public interest. This does not happen in a lot of countries- especially regarding Covid-19, we have seen that bad things have happened. For instance, governments responded to the crisis situation by providing less information so as not to be exposed to criticism. However, this actually makes people more susceptible to misinformation and magnifies its negative impact. For instance, it was believed that taking hydroxychloroquine would protect you against Covid-19, which in fact is extremely dangerous." 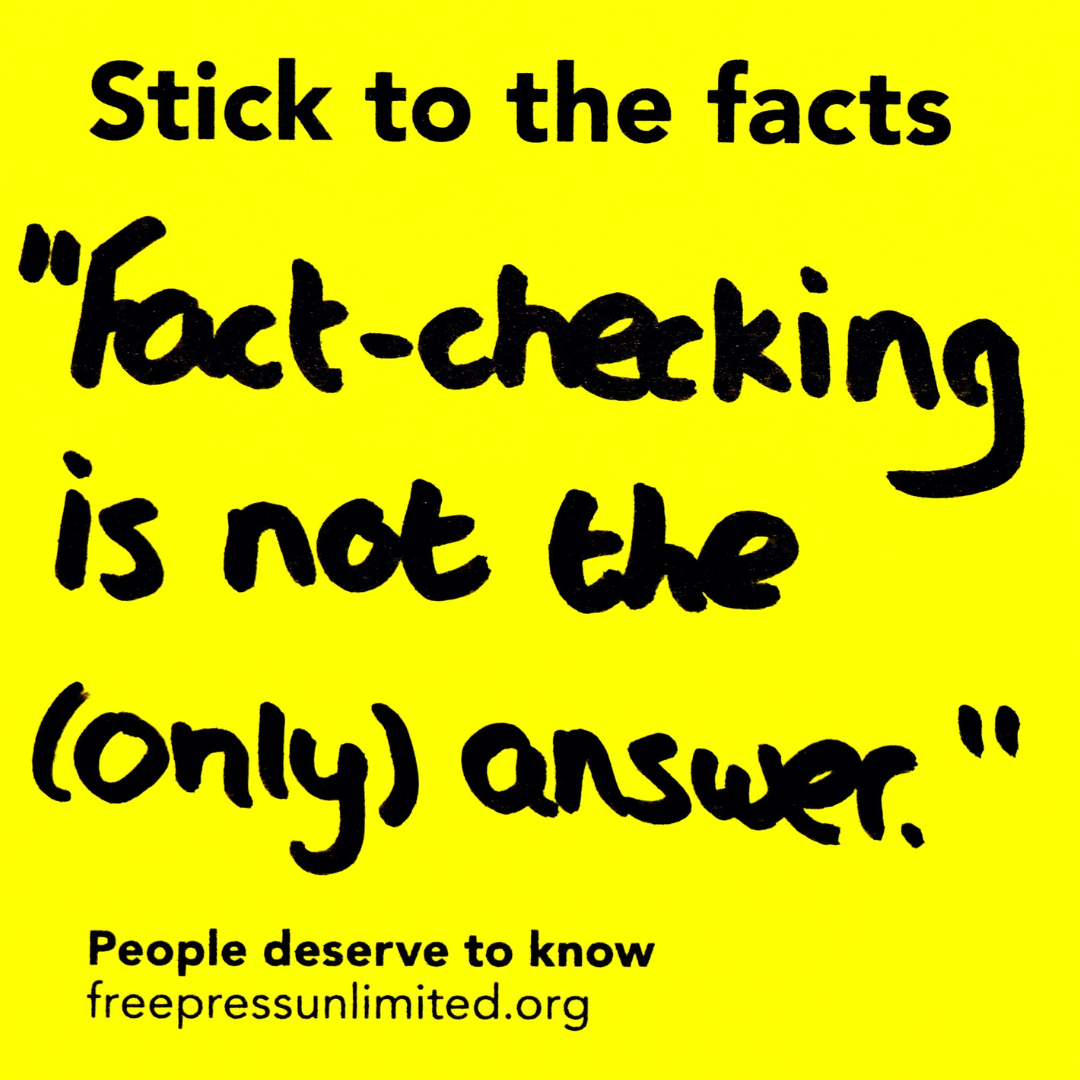 With the increase in fake news, the number of fact-checkers has also increased. A positive development?
“In the end I don't think so, but of course it's not so black and white. The idea isn't bad at all, it's also a part of professional journalism to verify information. What goes wrong is that it has become a priority, thanks to the urgency of states to act against disinformation. I think that that is a misconception, we at Free Press Unlimited believe that the only sustainable response to disinformation is to make people less receptive to this kind of information, to make sure they are well-informed and have access to various sources and professional journalism. Moreover, we see that quality journalism is under enormous pressure, so the focus should be more on that. How do we ensure that people have access to good information?

Another concern with the focus on fact-checking is that if one keeps emphasizing to people that the information they receive is incorrect, it creates the idea that there is actually no reliable information out there. That's exactly what those who spread disinformation want: for everyone to start doubting the information that comes to them, and believe that facts don't exist because it's all subjective, which is nonsense. Repeating that everything needs to be fact-checked reinforces that.”

People who feel overwhelmed and feel like there is no truth left, what would you say to them?
“I think it's very important to keep emphasizing: there is quality information, we have facts and a shared reality. Make sure that you use multiple sources to inform yourself and that you are not only relying on online channels. That's where the algorithms are that feed people with information they are likely to click on, because it fits well with their online behavior up to that point. That means that you are not likely to be challenged on the opinion and beliefs that you have. So keep looking for diverse information, and also keep the faith that journalists really do their best to inform us as objectively as possible.” 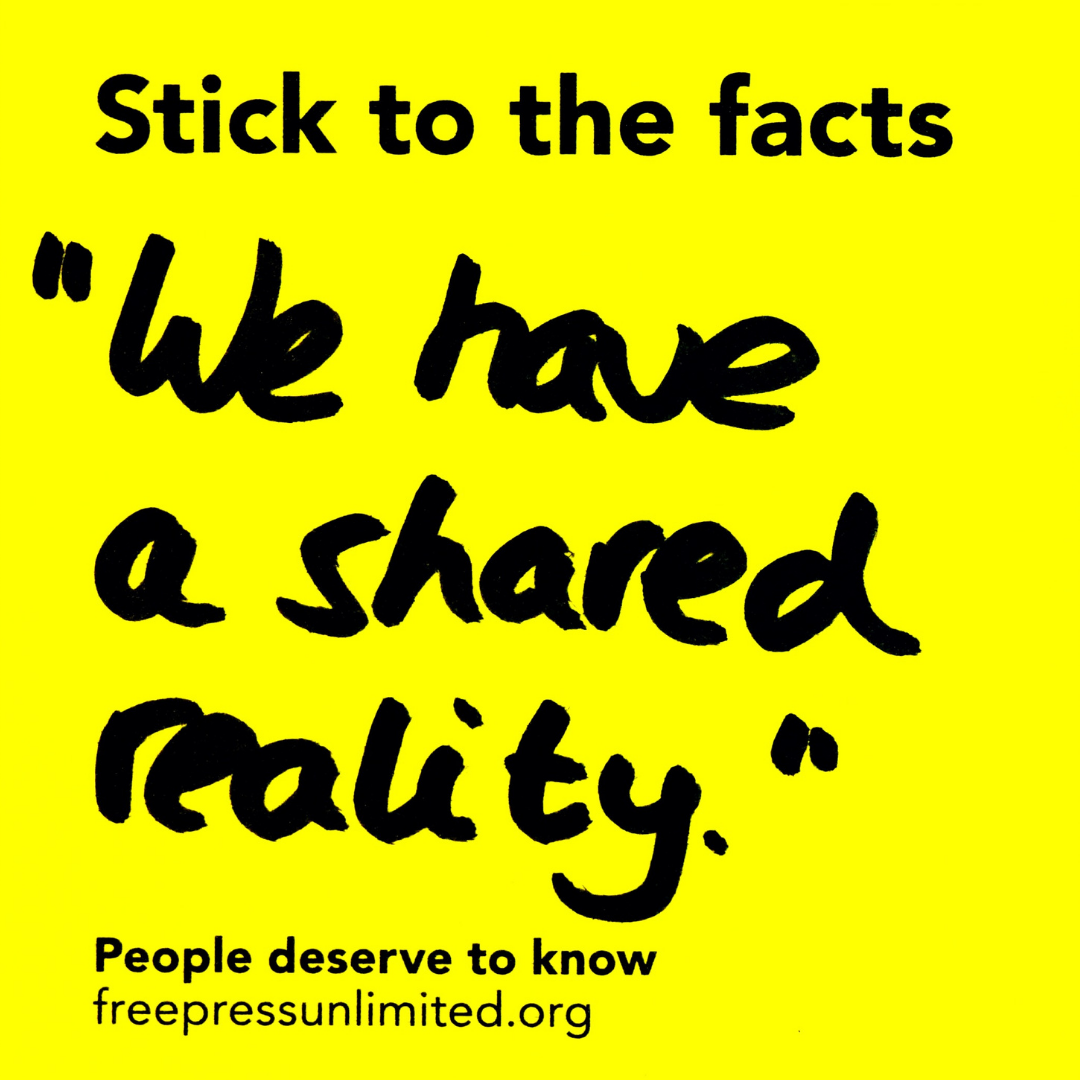 Is there a global or European approach to disinformation?
“There is no global approach. The social media platforms have their own user rules that they use regarding this issue, which is global in a way because we're all on those platforms, but they don't have a broader approach. They limit themselves to act on illegal content and advertisements around elections, in consultation with national governments. The EU does have a Code of Practice on Disinformation, which they are now updating. Free Press Unlimited and other organisations have been critical of the first version. This again has to do with the excessive focus on fact checking, which has been proclaimed as the primary response to disinformation.

We believe that the emphasis should not be placed on how to fight false information, but on how we ensure that people have as much access to good quality information as possible. For this, the survival and stimulation of independent journalism is essential. There's not going to be a silver bullet about what to do against disinformation, it doesn't exist, it's different in every context. You want to make sure that people are not susceptible to disinformation, because it will always be there. Then, the moment they receive disinformation, they can tell themselves that something is not right. In our view, that is the only sustainable way to do something about this.”

Together with 61 organizations a joint statement was made urging the European Commission to strengthen its annual Rule of Law report.

High quality journalism faces a major challenge in these times where fake news and disinformation are all around us. That's why we launched the...

More diversity in the newsroom can improve trust in media

Berit Zandbelt, research assistant at the University of Amsterdam and master student at Utrecht University, and assistant professor Koen Leurs to the...