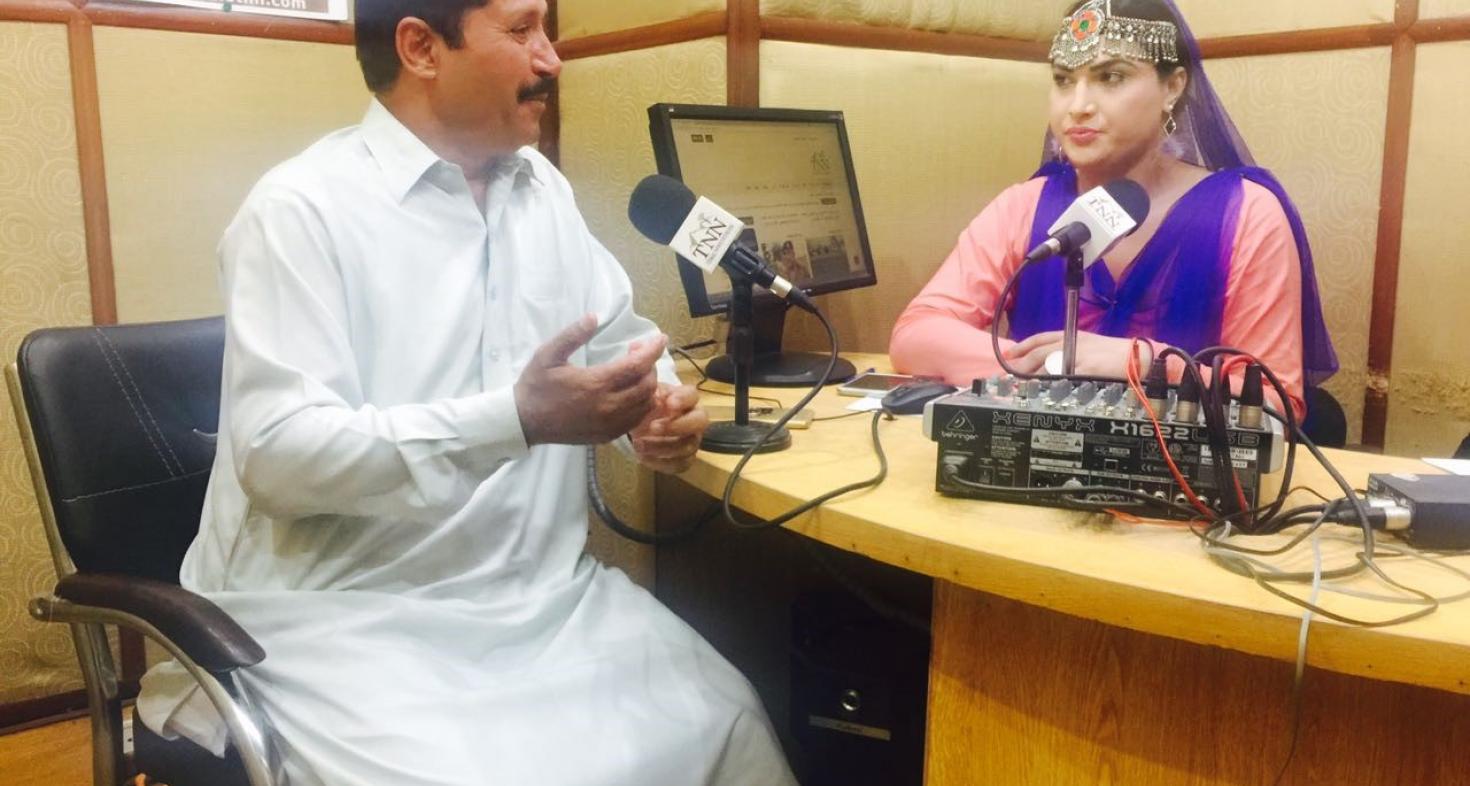 A radio station in the most rural and conservative area of Pakistan hired Sobia Khan, a transgender woman, as their new radio host. This small decision has a large impact in a country where transgenders are marginalised and face discrimination every day.

Being considered neither a man nor a woman but a deviant “third” gender causes transgenders in Pakistan to be subjects of ridicule, abuse and violence. A deep rooted stigma around this marginalised group forces most of them into begging on the streets, working as sex workers or dancing at weddings. From an early age Sobia knew she wanted a different path in life than the one that is laid out for most transgenders in Pakistan. Despite many barriers, Sobia pursued her dream and obtained a bachelor's degree in social sciences. Tribal News Network (TNN), longtime partner of Free Press Unlimited, is a radio station in Peshawar, Pakistan, which hired and trained Sobia to become the first transgender radio host in the country. Now she hosts a weekly program on TNN, which has approximately 50.000 views per week on Facebook. Her story is one of success and breaking down barriers in a country where most transgenders still deal with inequality and poverty.

Sobia’s journey to becoming the first transgender radio host in Pakistan wasn’t particularly easy. “I tried to work at many other places before I came to TNN. No one wanted to hire me,” Sobia says. But she was determined to work in media; “I want to show the world that transgenders can also have respectable jobs just like everyone else. We deserve to have other options than than sex working, begging or being an entertainer at weddings.” She continues; “I want the issues that we as transgenders face to be more equally covered by the media.”

Said Nazir, Director at TNN who was responsible for hiring Sobia, confirms the difficulties transgenders face when searching for a job. Even though TNN has a progressive history of including minorities, the decision to hire Sobia caused quite some internal resistance. Said elaborates; “When I revealed my decision to some of the senior staff members they were very critical. They said it may earn a bad name for TNN.” According to Said, it took a while for all the staff members to get used to Sobia’s presence: “In the beginning I functioned like a bridge for all the communication between her and the rest of the staff. One staff member even refused to work with her.” Not only internally but also from outside the organisation there was resistance, says Said. “People are very biased about transgenders because they don’t know anything about them. So in the beginning people left a lot of comments in which they made fun of her.”

Now, only eight months later, Sobia has completely won over the hearts of both her colleagues at TNN and the audience; who enjoy listening to and watching her shows. “The same colleague who initially refused to work with Sobia is now the producer of her show and enjoys working with her,” according to Said. With her new job Sobia also serves as a role model for others in her position, Said adds; “other transgenders in the community look up to her and are happy to be represented in the media through Sobia.” Sobia explains that “since I started this job many others from the transgender community told me they would like to pursue a career in media as well.”

The rights of transgenders are slowly improving in Pakistan. Thanks to the efforts of many transgender community based organizations (CBO) and transgender activists. The biggest and most recent achievement being the passing of the Transgender Persons (Protection of Rights) Act in March 2018. But “changing the hearts and minds of a whole society is a harder and slower process,” says Said. He believes that new role models like Sobia have a great impact on the emancipation of transgenders in Pakistan. There is still a long way to go before complete equality is realised for transgenders in Pakistan, but hopefully Sobia and others like her can pave the way for all transgender women in the future.

Tribal News Network is an online and radio news agency in the northern tribal areas of Pakistan. Tribal News Network strives to include and represent all minorities in society. For example, in the past they trained 30 female students from journalism schools to support and encourage more women to enter journalism in the conservative areas where they work. Free Press Unlimited has supported TNN since its inception in 2013. We are committed to promoting gender equality and providing a voice for women in challenging environments such as Pakistan. In addition, we support efforts to bring information to marginalised, media dark areas. To this end, Free Press Unlimited has provided organisational support and training for TNN’s journalists.

In the Central African Republic, that has an ongoing history of conflict between different rebel groups and the government, community radio stations...