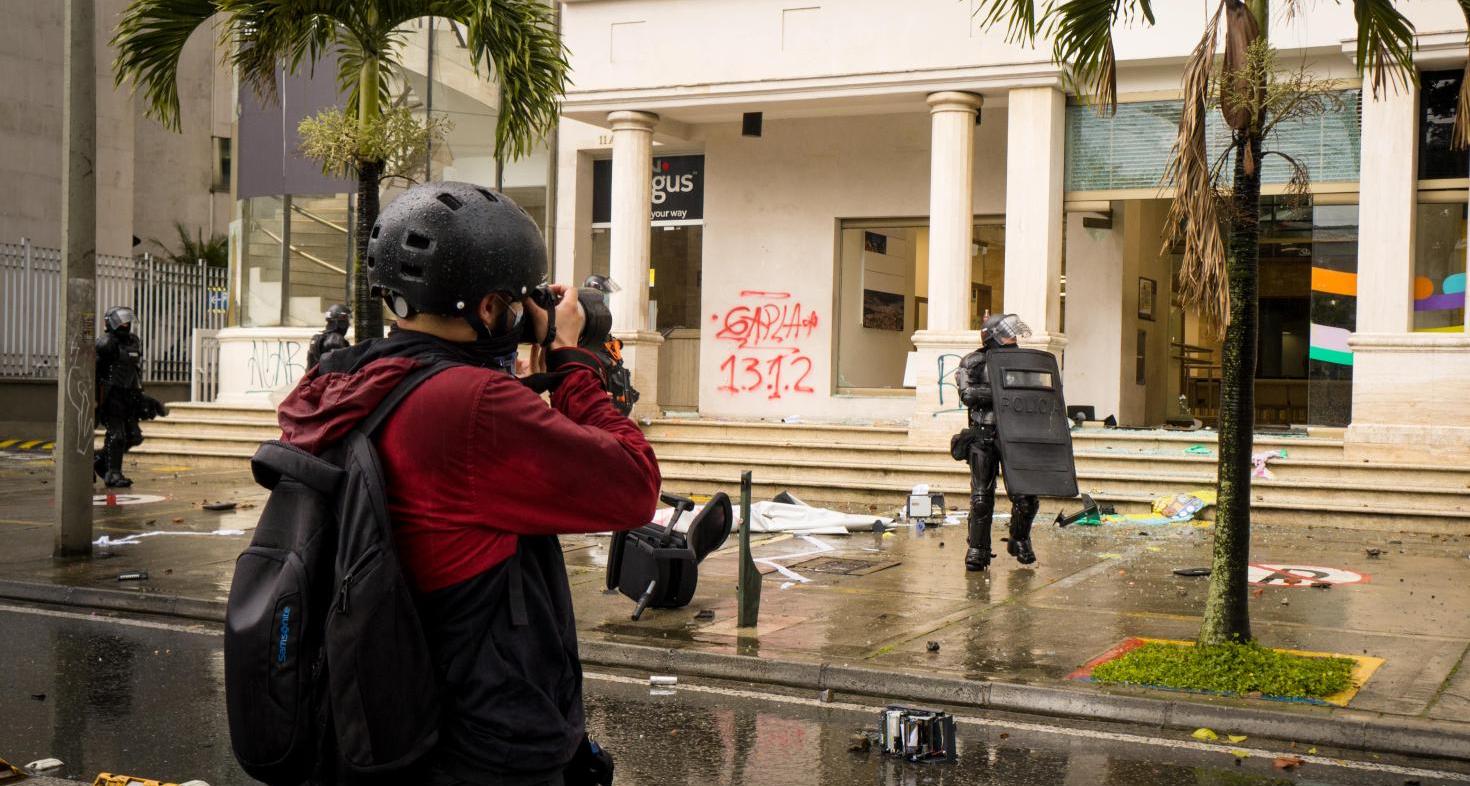 Legal attacks on journalists in Colombia

In our ongoing campaign we raise awareness on the safety of journalists worldwide. The difficulties journalists are facing in countries such as Ukraine and Afghanistan have become painstakingly clear, but what is it like in other parts of the world? In a series of stories, we speak to experts from different countries to find out. This time: Ana Bejarano Ricaurte and Susana Echavarria speak to us about the situation for journalists living in Colombia.

Ana Bejarano Ricaurte is a lawyer and the co-director of El Veinte. El Veinte is an organisation that works for the judicial defense of  freedom of expression of journalists, media and users of social networks. Susana Echavarria is a member of El Veinte.

What does El Veinte’s work entail?

El Veinte focuses on legal defense and judicial interventions, which is a pressing need because judicial harassment in Colombia has increased during the past decade. We aim to build networks of pro bono lawyers that can assist journalists and media. It is a two-way street: we see constitutional threats to press freedom and work on that, but we also want the legal profession to step up and take their social responsibility. In practice this means that we take on individual cases, and do strategic litigation, like challenging laws that limit press freedom.

We also do legal editing. This means that we enable legal editors to critically review any written piece or article before its publication, serving as the “last set of eyes” before it becomes final. We try to bring the act of legal editing to Colombia and Latin America, because it's very absent here. This is a shame because we think that it is a great way of protecting journalists and preventing legal conflicts. And even if it does not prevent a lawsuit, it helps journalists to understand the legal risks they are taking as part of their work.

What is the situation like for journalists and media in Colombia, especially when it comes to legal situations?

In Colombia, due to the long lasting armed conflict, the biggest risk for journalists has always been the threat to their lives, to their families, and to their personal safety. Unfortunately, on 16 October 2022, Colombian journalist Rafael Emiro Moreno was killed in Córdoba, a region in the coast, because of his work as a journalist. He had been warning authorities for a long time that this was going to happen and that he feared for his life.

"Nowadays, powerful politicians and business people have been using a more institutional way of obstructing the press, like legal intimidation and  harassment."

It is very sad, because murders of journalists have actually been decreasing. Nowadays, powerful politicians and business people have been using a more institutional way of obstructing the press, like legal intimidation and  harassment. Of course, it is better than journalists being killed, but it is still very worrying because it is very effective. Our legal system is not fit to stop this type of pressure.

How does El Veinte take on this challenge?

At the moment we are trying to pass an anti-SLAPP law. A law that would protect journalists against unfounded lawsuits intended to censor, intimidate, and silence mainly journalists and human rights defenders by burdening them with the cost of a legal defense. This is what we call SLAPPs, which is short for Strategic Lawsuits Against Public Participation. To get this law approved probably is very unlikely, because some of the biggest judicial harassers are the people of Congress. But it is still important to start talking about this phenomenon, and making people aware of this problem. So for us, the effort is still absolutely worth it.

We indicate three main ways in which journalists can be harassed. The constitutional way, which is a very easy and short process. The criminal way, which is used a lot but there are not many convictions, so it is only used to create fear and self-censorship. And the third and newest way is the civil way. That is one of the most used ways to threaten journalists at the moment. And it's a very effective way, because our civil procedure has no way to stop an unfair proceeding, a lawsuit that is only meant to silence the press. Instead, the judges just tend to think that any defamation lawsuit is legitimate, and they are not sensible to constitutional considerations. These lawsuits have become a very pressing threat.

We accompany journalists, human rights defenders and social media users in all these types of cases.

Do many journalists get convicted?

Very few journalists are actually convicted. Maybe not even one in decades. But we do have a lot of cases where journalists have lost and have been convicted to pay for damages. Unfortunately, for this we do not have statistics because our justice system does not register when a person being sued is a journalist.

Can you tell more about the circumstances around the murder of Rafael Emiro Moreno?

Rafael Emiro Moreno was investigating local politicians that were stealing money, and not doing the public work that the city demanded. He uncovered that, and they were fed up with him because of this. And then he was murdered.

"It is scary to think we might go back to those times where the biggest threat is murder."

It's very frustrating because it is fairly obvious who did it. And yet still the authorities do nothing. It is not surprising, because the authorities already did nothing when Rafael Moreno said that he was receiving threats. It is scary to think we might go back to those times where the biggest threat is murder, because even though it is also wrong and difficult, it's much better to fight in court than with bullets.

Can you give an example of a case you worked on recently?

We are now dealing with a case of two women journalists who are charged by Ciro Guerra, the biggest movie director in Colombia. He was accused by women of sexual harassment, and these two journalists wrote a story that showed proof of this. He sued them for $1 million because he lost contracts with Netflix, Amazon, and others because of it. He also sued them criminally and constitutionally, which is a very clear attempt to have them silenced. It's a very interesting case, that also ties into the #MeToo movement and it is the first of its kind in Colombia. It also has the element of feminist journalism; journalism that is carried out by women to represent women’s voices.

For the criminal case, they were called to court to share their version of the facts, which we advised them not to do because they have the constitutional choice to not attend that hearing. And then this case was dropped. For the civil case we are going to display the proof of how they did their work as journalists and discovered what is displayed in the investigation. It's a very tense case because it involves a lot of money and our judges are not used to having journalists being judged in a civil procedure like this. The culture in Colombia is also a very chauvinist, sadly it is a misogynistic country, and a lot of people think sexual harassment is not so bad or nothing to worry about. For the journalists it is going to be very stressful.

It's a very high profile case, and it should be because it could open the door for more of this important reporting. This is not just one person saying ‘this guy harassed me’, which should be enough either way, but here it is backed up by journalistic reporting that has proof, like photographs and various testimonies.

In this video Catalina Ruiz-Navarro, one of the charged journalists, shares her thoughts

Is there anything else that is needed in Colombia to improve the safety of journalists?

Colombia has a special police group that is intended specifically for the protection of journalists, but it is not very effective. I think it needs to be much more open for participation from civil society. We cannot have this institution be created by the State and solely run by the State. We need civil society to have oversight on it. Because sometimes policemen have very apprehensive views of journalism and journalists.

"Media organisations have to back up and take care of their journalists."

For this, we also need to have strong civil society organisations that are able to pressure institutions for the protection of journalists, especially when they say that they are in danger, like the journalist that was murdered. So making these institutions stronger and more effective is important.

Lastly, journalists should be backed up by their employers too. It is very important that they have a strong and reliable organisation behind them. Sometimes journalists are very lonely and feel powerless. They don't have a lot of resources to access decent legal defense, in the case of judicial harassment. Media organisations have to back up and take care of their journalists.

Through Reporters Respond and the Legal Defense Fund, Free Press Unlimited has supported El Veinte in their efforts to defend journalists and challenge harmful laws in Colombia through joint strategic litigation.

Free Press Unlimited and Linklaters are delighted to further strengthen their existing partnership.

Myanmar women journalists in exile: living their lives “as quietly as possible”

Since the start of the coup on February 1, 2021, Myanmar has seen an alarming increase in the repression of critical voices and dissent. The Myanmar...

Statement of solidarity with Indonesian journalists and independent media

Free Press Unlimited is concerned about the recently adopted new articles in the Criminal Code of Indonesia, which pose a threat to press freedom in...