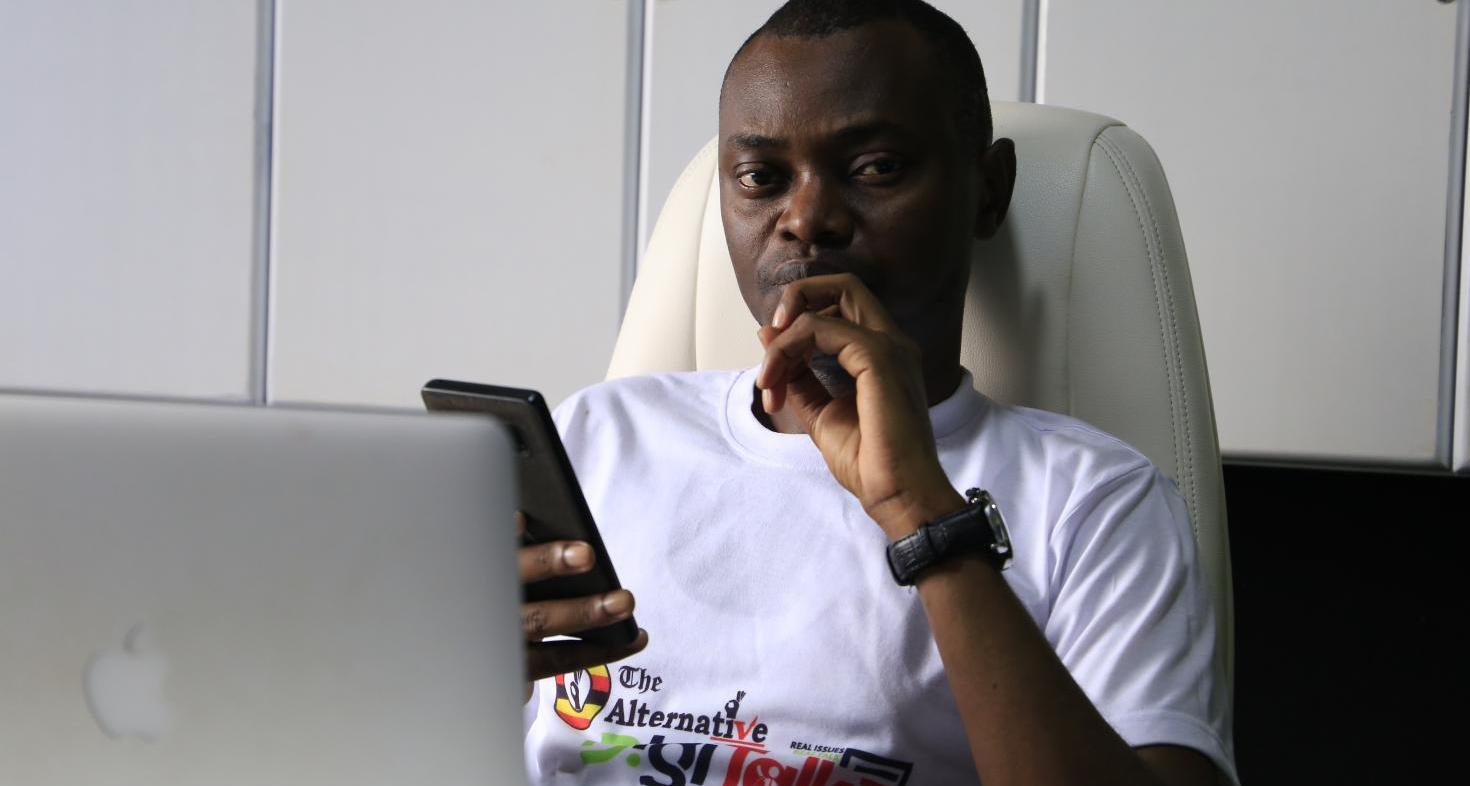 From presidential charges to office raids: being a journalist in Uganda

In our current campaign we raise awareness on safety of journalists worldwide. The difficulties journalists are facing in countries such as Ukraine and Afghanistan have become painfully clear, but what is it like in other parts of the world? In a series of stories, we speak to experts from different countries to find out. This time: journalist Norman Tumuhimbise on Uganda.

Norman Tumuhimbise is the co-founder and team leader of Alternative DigiTalk, an online media platform in Uganda. Free Press Unlimited supported them after their office was raided in March 2022. Independent journalism is under threat in Uganda, and journalists face repression. There is a particularly tight grip on anti-government narratives.

How would you describe the current situation in Uganda for media and journalists in general?

It's a 50/50 situation. If you are pro-government, you will definitely have no issues with them whatsoever. In fact, they would be praising you and give you medals for doing commendable work. But should you wake up in the morning and you want to ask tough questions, then the government will label you anti-government.

It’s not like you have a critical Tweet or Facebook post one day, and out of the blue they put you in jail. They monitor you to see if you are consistent in being negative towards them. If you are, they will target you. Which has happened to us with Alternative DigiTalk.

What kind of medium is Alternative DigiTalk?

We are an online platform which we founded during COVID-19. Initially we were a social movement that was fighting for youth rights and good governance in our country. Because I was the national coordinator at that time and had been part of a demonstration calling out corruption within the parliament, I had been blacklisted from being hosted at any Ugandan media house.

So Alternative DigiTalk was born out of the fact that the state kept me from appearing in other media houses. As a platform, we shall host you and ask you tough questions. We focus mainly on young people and are present on Facebook, Twitter and YouTube. We are not on traditional TV channels, we appear on people's phones. After we started, the government wanted us to subscribe to their regulations: the Uganda Communications Commission. But we resisted because we don’t want to be controlled by the Ugandan government.

How about the justice system in Uganda, does it leave enough room for journalists to operate without being prosecuted?

Something that is really concerning is that the president has signed the amendment to the Computer Misuse Act. This amendment limits the writing or sharing of content on online platforms, to “deter the misuse of online and social media platforms.”

It feels like we are trying to swim through an ocean filled with sharks that are likely to swallow us if we do not confront this now in the court of law.

And this means serious trouble to us, although it is taken lightly by some people. For Alternative DigiTalk it is especially worrying, because the law targets online media. And this also means that it’s mostly affecting young people.

Young people have transitioned from holding remotes to holding phones. They receive most of their information through their phones. So when you obstruct online media, it means that you are blocking most young people from accessing information. And once young people are blocked from accessing information, it means that they will be in the dark. They cannot hold their leaders accountable. As a team we are trying to look for a way to challenge this amendment in court. It feels like we are trying to swim through an ocean filled with sharks that are likely to swallow us if we do not confront this now in the court of law.

What happened in March 2022 regarding the raiding of your office?

Like I said, they do not come for you at once. There is a period of time that they monitor you and see what you're doing. If you continue to be anti-government, I can assure you they will come for you. For us, it started with threatening comments from anonymous accounts on Facebook for example. This ultimately climaxed into them raiding our office on March 10th.

They arrested and jailed me and my team, nine of us in total. They also confiscated all our digital computers and cameras. And by God's grace, Free Press Unlimited supported us by replacing our equipment with at least a second hand camera for now, to help us start broadcasting again. Because we believe that once they threaten you and oppress you like they did and you run away, they have succeeded. When you come back and continue doing your work, most likely you have the public with you. We feel for 100% certainty that what we are doing is indeed what we must do.

And if we do not do it, there is no way our children will be able to do it. If trouble must come, I will face it now so that my children don’t have to. Because if we chicken out and run away, it means we have not given a good example to our successors. That's how we persist.

Free Press Unlimited relocated I believe five of our team members and gave them basic welfare after the raid happened. Seven of the nine of us that were arrested were released a couple days after the raid, but me and my colleague Faridah Bikobere were kept in detention. Now we are not in jail anymore, but we are charged with cyberstalking the president of Uganda.

At the moment we are going in and out of court every month since the raid happened, to answer to these charges. It’s a way of the government to keep us busy. I have also learned from my colleagues, especially the female colleagues, that the agents from the chieftains or military intelligence continue stalking them. When they took our equipment, they had an opportunity to hack it and collect our contact details, so they keep monitoring us and sending messages on WhatsApp.

Do you think they will actually convict you for these charges?

It's tricky. This is an unpredictable country. At court we raised the issue that there were two illegalities in our case. First of all, the Constitution provides for dismissal of a trial in the event that the accused has been tortured, which has happened to us. When we raised that in court, we thought that the trial would be filed immediately, but it wasn’t.

We see that for judicial officers it is also hard to work independently, because they are in risk of losing their job. Especially in cases that are political. Therefore activists and independent media workers that have to appear in court have it difficult, because judges may convict them in order to save their jobs. In a few cases, where the judiciary officers have worked independently, the government labeled them as accomplices and allies of those that oppose them or write against them. That puts us in a situation of uncertainty, that may result in a conviction.

You can't be neutral. You must be either or.

What would you like to say to the younger generation in Uganda?

I live by the philosophy of confronting the monster today so that your children can live peacefully. We have watched the likes of Gandhi, Martin Luther King Junior and Mandela. They are our points of reference that make us strong, and we equally want to be these points of reference for our grandchildren. If we do not push back, the space continues to shrink. In Uganda there are very, very few media houses left that haven’t been compromised. To operate, you must be pro-government or else you will face repression.

You can't be neutral. You must be either or. So we have decided not to be part of them. As long as they do things that are not called for, we should be on their neck to make a better present and also a better future for ourselves and our children. We are not rebels. We are simply pointing at wrongdoings, pointing at bad governance, pointing at human rights violations and torture, pointing at injustices. And we will continue to do that.