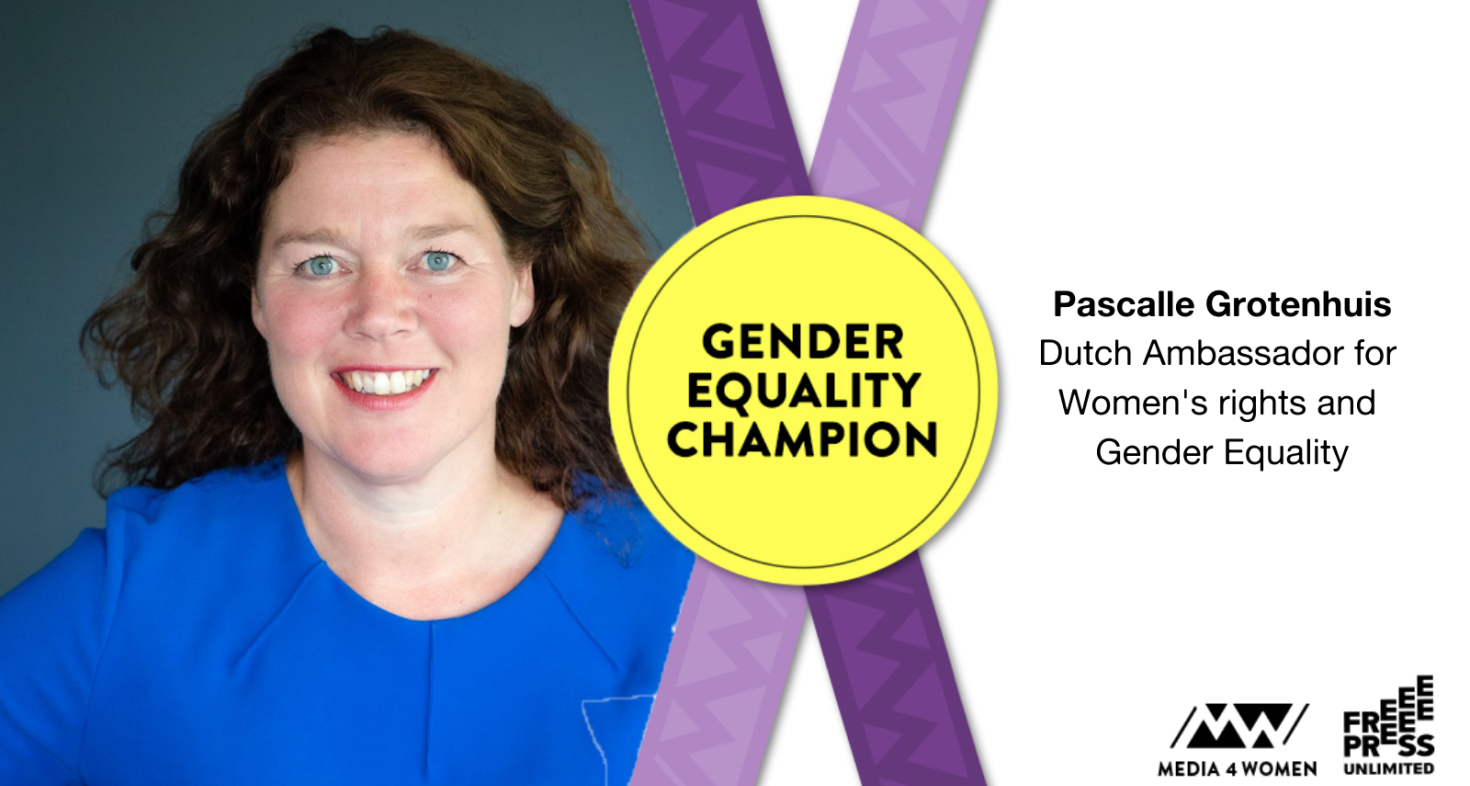 During the Media4Women campaign we highlight Gender Equality Champions: people who lead the way in working towards gender equality in the media. One of our champions, Pascalle Grotenhuis, is the Dutch Ambassador for Women's rights and Gender Equality, “It might take more than my lifetime to achieve gender equality, but I just don't see it not happening.”, she states.

Online harassment is a growing issue, for both men and women from different fields of work. However, women journalists that speak up and raise a critical voice carry the double burden of being a journalist, and being a woman. The attacks directed at them are very gendered and sexual in nature, which makes it a gender issue.

According to the 2020 study from UNESCO and the International Center for Journalists (ICFJ), 73 percent of women journalists face online harassment, and one third of them even consider leaving the profession because of it. Pascalle Grotenhuis is the Dutch Ambassador for Women's Rights and Gender Equality since 2020, and in this position advocates for safety and equality for women worldwide.

When you hear these numbers, what do they tell you?

“It's shocking, and at first paralysing, but it also makes me want to push harder for change. For the Netherlands, freedom of expression is enormously important. It's a high priority within the Dutch human rights policy, and we have a particular focus on the position of women in and through the media. The increase in online attacks shows a trend of women who are visible and take up visible roles getting a lot of pushback. It's a big, complicated problem that I cannot tackle by myself, which is why I feel partnerships and coalition building is so important.”

Online violence in general increased enormously during Covid-19, and it is even more clear now that we do not have the right mechanisms in place to prevent or criminalise these attacks in digital spaces. What steps should be taken to change this situation?

“I think it starts with creating a more gender equal media landscape. This means having more women in leadership positions, as editors, as owners of media. We also need men to speak up. It's not about polarising men and women, it's about including men in breaking stereotypes and standing behind these women.

Because inequality is embedded in society. We have seen this with the sexual misconduct cases within the Dutch talent show The Voice of Holland. The accused are the director, two coaches, and the leader of the band, and they are all men. So it's very important that there is a balance between men and women. Same goes for companies and for governments.

Another thing that is very important is accountability, that is why I think it's necessary to have all the right mechanisms and laws in place. At the ministry for example, we have tons of procedures that are in place where you can file a complaint. We have a code of conduct, and we stress how important it is to have a safe working environment. But unless you walk the talk and you set the right example with leadership and role models, nothing's going to change because procedures alone have never changed the system.”

When you look back at progress made on gender equality over the years, where do we stand now compared to, for example, 20 years ago?

However, progress can be lost easily. If you look at the estimated time needed to close the global gender gap (as researched by the World Economic Forum), it was 94 years in 2020, and now, aggravated by the Covid-19 pandemic, it has gone back to 136 years. The pushback on the move towards gender equality has been so immense, also against journalists specifically. Some people in the public eye have a very negative, anti-media rhetoric, and this legitimises violence against media, against female journalists or against women in general. And it is all interlinked, often the same people who are vicious towards the media, are also vicious towards women.

What makes you feel positive about improving gender equality and diminishing gender based violence?

“The next generation. I always say that my daughter is my role model. It's the next generation that doesn't seem to be stuck in the same old perceptions, and I just hope that it doesn't change when they get older in life.

What also gives me hope are the governments that have a feminist foreign policy and ministers who put human rights, sexual and reproductive health, and gender equality at the heart of their policies.

Lastly, what makes me positive is that more and more men are engaged in this movement. When we launched a campaign in the ministry around our activities to stop sexual and gender based violence, we asked the men in our ministry to raise the flag instead of women, and many responded. I'm just an eternal optimist. It might take more than my lifetime to achieve everything, but I just don't see it not happening.”

Concluding the campaign as our last champion is Irene Khan, the United Nations special rapporteur on freedom of opinion and expression. “The...
story

Borka Rudić is Secretary-General of the non-profit Association of BH Journalists (BH Novinari), based in Sarajevo, Bosnia-Herzegovina. “A big problem...